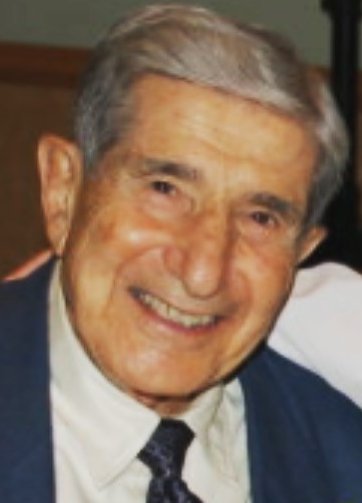 Bill was born in Detroit, Michigan on February 25, 1924. He was the son of Armenian immigrants and he was very proud of his heritage. At age 2, his family moved to Harvey, Illinois where he grew up.. He played the cornet in his elementary band and was a soloist. He graduated from Thornton High School in Harvey, where he was President of his senior class and lettered in basketball four years, baseball three years and football one year. He made All-State basketball in 1942 and was inducted into the Illinois High School Basketball Hall of Fame. He was recruited to play ball for Purdue University by Ward “Piggy” Lambert, on an athletic scholarship for basketball and baseball. He played one year and then enlisted for service in World War II.

He went to the Citadel for six months where he also played basketball before being sent to fight in the infantry with all other students in the Citadel.  During World War II he was part of the 397th Regiment and fought in France and Germany for the last six months of the war. He received the Combat Infantryman Badge, the Bronze Star and the Presidential Unit Citation. He played on 397 Regiment baseball team and 3rd Division in Europe basketball team.

After the war, he returned to Purdue where he studied and played ball. He was basketball team Captain and MVP in 1948. He also received the Chicago Tribune Silver Basketball Award. He always believed that academic work was the most important part of schooling. He received his B.S. in Biology and Physical Education in 1949. While working he received his Masters from Purdue in Education.

After graduation Bill coached in Greensburg, IN, basketball, baseball and was assistant in football. During this time, Bill married his adored wife Angie and they had their first child there. The family moved to West Lafayette in 1953 where Bill began his teaching and coaching career at West Lafayette High School. He coached basketball, baseball and assisted in football over the next 30 years. He taught classes in Physical Education, Drivers Education and Health and Safety. He lived what he taught. He was a model to students of how to live a full, honest, kind and respectful life.

Many told stories of how he helped them along their way. The gym at West Lafayette High School is now named The Bill Berberian Gymnasium. He is being inducted into the Indiana Basketball Hall of Fame in 2020.

Bill was a gardener, growing almost all the food he and Angie ate. During his working career he also received the Council of the Sagamores of the Wabash award from the State of Indiana, Governor Frank O’Bannon, 1999.

Bill considered himself blessed to have found and married his wife, Angie. They were married for sixty-nine years. They honored each other. They worked, traveled, lived, loved, and spent time with many wonderful friends. They developed community wherever they landed. She was so proud of him, she would always say: “He is the love of my life”. He was always appreciative and grateful for what he had. His daughters were blessed with a dad who loved them unconditionally and set a wonderful example for them his whole life. He enjoyed all the contact with former players and students he has had over the years.