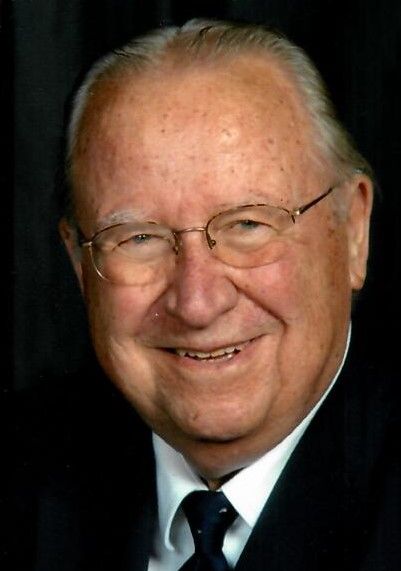 Wayne Edward Firestone, 97, of West Lafayette, passed away on Saturday, September 11, 2021 at his home at University Place Healthcare in West Lafayette.

Wayne was a 1941 graduate of Culver Military Academy and continued his education at Purdue prior to proudly serving in the Unites States Army during World War II.  He was honorably discharged as a Captain in 1946.  He was a graduate of the IU School of Business in 1949 & Northwestern University School of Law in 1952. He passed the Bar in both Indiana and Illinois. He later graduated from the  University of Wisconsin School of Banking.   He married Betty Ruth Woodard in 1951, with whom he had two children, Debra Kay and Steven Alan Firestone. Betty preceded him in death in January 1999. On December 7, 1999, he married Linda Lipp-Hodson in Lafayette and she survives.

Wayne worked as a Banker for the Union State Bank in Westfield and then the State Bank of Rensselaer, retiring in 1988 as President. He was a member of Central Presbyterian Church in Lafayette and Associate Member of the Vanderbilt Presbyterian Church in Naples, FL.  He was also a member of the Westfield and Rensselaer Lions Clubs, and Lafayette Kiwanis Club. He was a lifetime member of the American Legion and VFW. He was also a member of the Curtis Creek Country Club in Rensselaer, and the Vineyards Country Club in Naples, FL. He served as a Trustee at St. Joseph’s College in Rensselaer and served as an officer of the Indiana Bankers Association. He was one of the founders of the Independent Bankers Association of Indiana and served as its second President.

Wayne was a family man and cherished time with his family. He was always happiest with his family and friends.  He enjoyed spending his time in Florida and playing bridge.  He also enjoyed good food and a nice atmosphere.  Wayne always knew where the finest restaurants were located.

Wayne was preceded in death by wife, Betty R. Firestone and parents, Clell and Garnette Firestone.