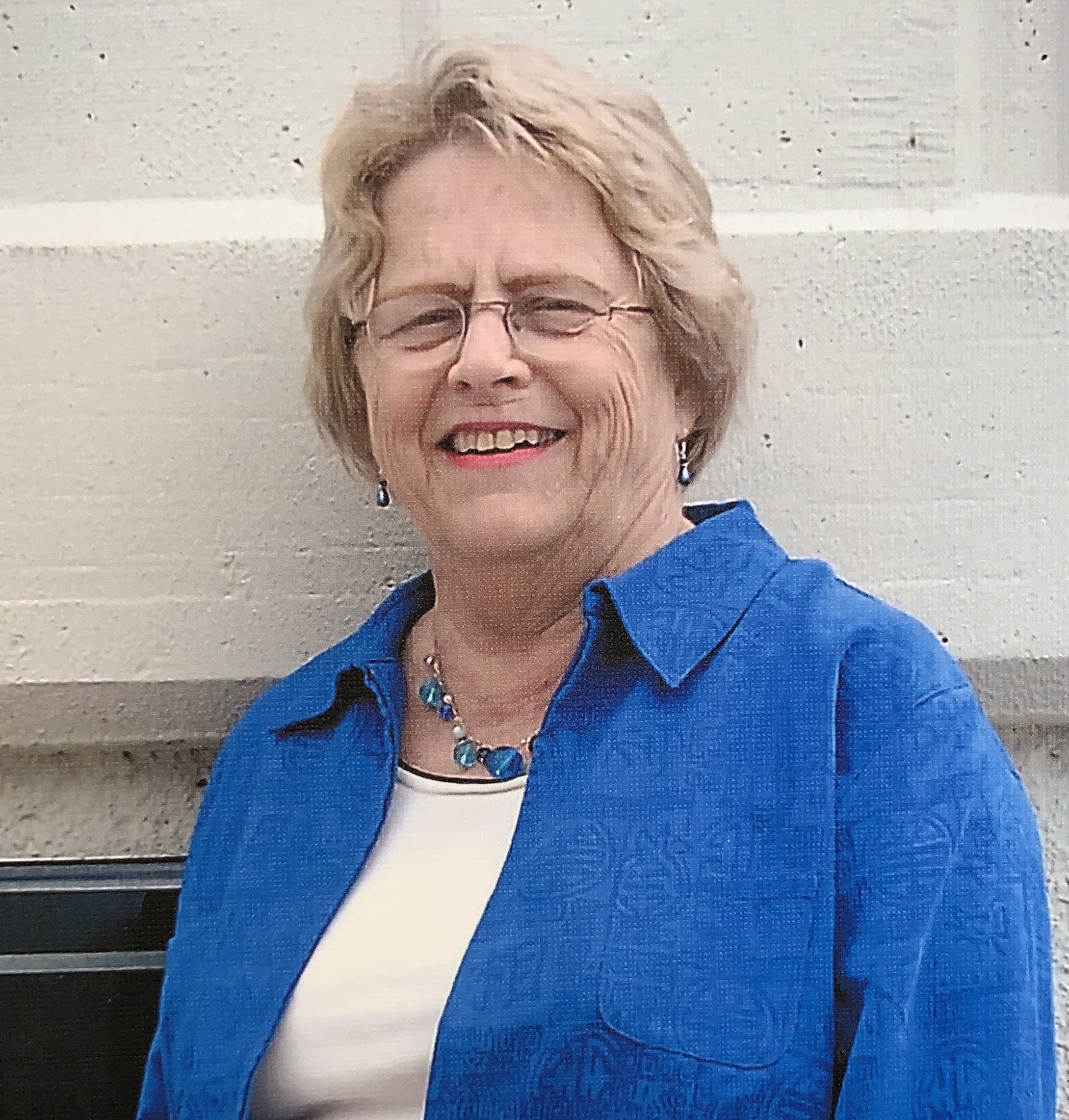 Sonya was born April 13, 1930, in Washington, DC to Lawrence and Helen Pedersen in Columbia Hospital for Women, which was the only hospital in the city that allowed female doctors. Her sister Karen was born in Washington in 1938. Sonya passed away Sunday, November 3, 2019, at University Place, West Lafayette, IN from the long term effects of kidney disease.

Sonya’s father Lawrence worked for the government and went to Law School at night while Helen volunteered for the League of Women Voters. When Sonya was 16 the family moved back to Grinnell, Iowa, where her Norwegian grandfather had emigrated. Lawrence began building his law firm and served two terms as the county attorney. After finishing high school in Grinnell, where she was active in sports and school groups, Sonya went to St. Olaf College graduating with a BS in Biology and Chemistry in 1952.

She was hired by Iowa State University to work at the Atomic Energy Commission’s Ames Lab where she worked with thorium and other materials at the end of the Manhattan Project. While working at Ames Labs, she met her husband Dale, a PhD Chemistry student. As she liked to say, they met working over a Bunsen Burner.

After marriage in 1953, Dale started as assistant professor of chemistry at Purdue University and they moved to West Lafayette. Larry was born in 1958, Eric in 1959 and Rich in 1965. After living on Wood Street for a few years, they built a house on Seminole Drive along with several families who became lifelong neighbors, participating in street games and holiday picnics.

Sonya became active in a range of groups, including the Democratic Party, the NAACP, the League of Women Voters, the Red Devils Mothers Club, and Cub Scouts. In 1976 she was elected to an at-large seat on the West Lafayette City Council.

Sonya enrolled at Purdue and obtained an MA in Political Science and Government in 1979, and was honored with a College of Liberal Arts Distinguished Alumni Award in 2004. She was elected in 1980 as the first female Mayor of West Lafayette and went on to serve six terms until stepping down in 2004. Her close friend, Marguerite Trachtman served as her campaign manager for all six campaigns with help from countless volunteers including her husband Dale.

The new mayor became good friends with mayor Jim Riehle of Lafayette, noting that Jim was like a big brother to her. This led to a long-standing collaboration between the cities with one of the largest joint projects being the decades long process of railroad relocation. The project was a collaborative project among the two Democratic mayors, Republican Congressmen, state representatives, and several Governors. In addition, the mayors worked closely with local and state officials of both parties to recruit and support the opening of the Subaru-Isuzu plant in Lafayette in 1987.

One of her major accomplishments as Mayor was to develop a Strategic Plan for West Lafayette, one of the first cities in Indiana to do so. The process brought the community together, involving citizens from many different political perspectives to serve on committees that would help set a course for its future.

In 1990, West Lafayette became the first city in Indiana to implement a curbside recycling program under the leadership of Street and Sanitation Department Head Dave Downey. West Lafayette citizens responded with resounding participation, helping to demonstrate the viability of recycling to other cities throughout the state.

Over the years, the City bought several strategic parcels of property at the edge of the city that included small lakes and wetlands. City Parks Department Director Joe Payne worked with Ducks Unlimited, the National Parks service and many other groups to purchase the property that would become the City’s Celery Bog Nature Area. The area opened in 1999 with a Nature Center that was financed by the Lilly Foundation.

The other major city accomplishment was the Wabash Landing Development, at the Levee, after Sears closed. Sonya convened a large committee to consider purchasing and developing the site, leading to a public-private partnership that resulted in a new hotel, apartments, and commercial district. As the resulting public-private partnership developed there was a $2 million financing shortfall. The City was approached by the International Carpenters Union, who offered to invest a portion of their pension plan into the project and also offered to recruit labor from other regions when the project was under tight timelines. The developer had never partnered with a union before and came away from the project praising the joint effort. The city also redeveloped the riverfront parks, including the playgrounds and skating rink. After her retirement, the City dedicated a plaza and fountain next to Wabash Landing in her honor.

While Mayor, Sonya also served as President of the Indiana Association of Cities and Towns and was elected to the Board of the National League of Cities. In 1978 she was chosen Women of the Year in Politics and Government. In 1989 she was awarded the Sagamore of the Wabash by Governor Evan Bayh.

Sonya remained active in the community after her retirement, holding board positions with the Art Museum of Greater Lafayette (interim President) and the Community Foundation of Greater Lafayette. Sonya and Dale were also patrons for the Lafayette Symphony Orchestra for over 40 years.

Sonya was a founding member of Our Savior Lutheran Church and served on the church council, taught Sunday School and sang in the Choir. She was also elected and served for 12 years on the Board of Trustees for St. Olaf College.

Sonya was fiercely proud of her Norwegian heritage and of being the granddaughter of a legal immigrant Norwegian farmer. She hosted annual May 17 Syttende Mai Independence Day parties coercing fellow Norwegians (and non-Norwegians who could sing) to participate in the celebration. The family tolerated Lutefisk and white potatoes every Christmas Eve, and she was thrilled to take her parents and family back to her grandfather’s birthplace off an island near Stavanger, Norway in the 70’s.

Sonya was passionate about her boys’ activities, never missing a game, meet or theatre production. She closely followed West Side and Purdue sports and was a long time Purdue Football and Basketball season ticket holder. Sonya’s and Dale’s travels included Dale’s sabbatical leaves in Germany and England; mayoral trips to Japan; skiing with friends and family in Colorado; retirement trips to Europe, north and South Africa; and visits with her sons and families in Australia, Eugene (OR), Chapel Hill (NC), Lafayette (CA), Wichita (KS), Kenosha (WI), and Vincennes (IN).

Sonya and Dale spent their last few years at University Place — happy to be near the Celery Bog and appreciative of the care received from the excellent staff whom she considered her friends.
She was preceded in death by her husband of 66 years, Dale, who passed away in August due to the effects of dementia. She is survived by her sons Lawrence Donald Margerum (Suzanne), Eric William Margerum (Debra), and Richard Dale Margerum (Sonya); Dale’s brothers John David Margerum (Virginia), and Donald L. Margerum (Barbara); her sister Karen Pedersen and niece Caroline Pedersen Shearer; and grandchildren Derick, Valerie, Lora, Aidan and Corey Margerum.

A 10:00 AM church service is planned for Friday morning November 29 at Our Savior Lutheran Church. The general public is encouraged to attend a drop-in remembrance 2:00 to 6:00 PM Friday afternoon November 29 at the temporary West Lafayette City Hall at Happy Hollow School. Sonya requested that in lieu of flowers that friends and colleagues be encouraged to donate to The Community Foundation of Greater Lafayette [http://www.cfglaf.org/index.php/memorials-tributes] or to The West Lafayette Library Foundation [https://wlaf.lib.in.us/library-foundation].