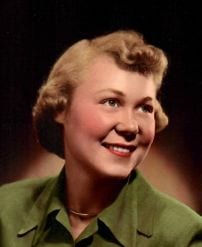 A Memorial service will be held at a later date.

Shirley Anne Edwards, 90, of West Lafayette, passed away on Wednesday, December 16, 2020 at Westminster Village. Shirley was born in Des Moines, Iowa to the late Carl and Vera (Simpson) Heggen. Upon graduating from East High School, she attended the University of Northern Iowa where she met her husband, Donald Edwards. They were married June 2, 1951 and enjoyed many wonderful years together until his death in 1996.

In addition to being a devoted wife and mother, Shirley enjoyed her bridge groups, book clubs, knitting, needlework, and traveling with Don. She also attended Trinity United Methodist Church and was an active member of her local chapter of P.E.O. International.

Shirley is survived by her sons, Kirk (Karen) Edwards of Winfield, IL and Keith Edwards of Michigan City, IN, her daughters, Karen Edwards of Lafayette, IN and Kate Edwards of Evanston, IL, her son-in law Ken (Cindy) Berkey, her twin sister Sharon VanDuesseldorp of Iowa City, IA, her sister Norma Jones of Prineville, OR, 10 grandchildren, and 7 great-grandchildren.

In addition to her husband, Donald, Shirley was preceded in death by her daughter Rev. Karolyn (Ken) Berkey and her brother, Louis Heggen.

A Memorial service will be held at a later date.