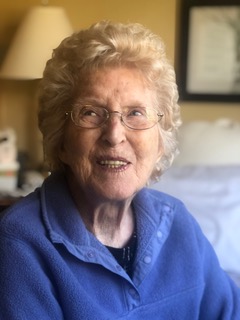 Ruth grew up in Biloxi, Mississippi and was a graduate of Millsaps College in Jackson, Mississippi. It was during her junior year at Millsaps that she became acquainted through pen pal correspondence with the man who would become her beloved husband, Dean, who was serving with the US Army in the Korean Conflict. They fell in love through letters, were wed in Jackson, Mississippi on June 28, 1952, and were blissfully married 63 years. Ruth earned a degree in education and began her teaching career in central Illinois. Ruth and Dean also served at Hanging Rock Christian Camp in West Lebanon, Indiana for seven years and in 1972 moved to Kansas, Oklahoma where they served for 37 years as educators, house parents, and grandparents to at-risk children at Cookson Hills Christian Ministries. In their latter years, the couple “retired” to promotional roles for the children’s home, visiting friends and churches across the country to raise support for the organization. In 2009, the couple arrived in West Lafayette where they quickly became a beloved part of the Friendship House and Crossroads Christian Church communities.  After Dean’s death in the spring of 2016, Ruth moved across the street from Friendship House to Cumberland Pointe and then to St. Mary where she received phenomenal care and love until her passing.

Ruth lived the last couple of years on a wing of St. Mary called Legacy Lane. In thinking about her legacy, it can be encapsulated in one phrase: “a devoted follower of Jesus.” Her love of and faith in Christ were the center of her marriage, family, teaching, ministry, and care of her neighbors. She was incredibly kind and thoughtful, with a self-sacrificing kind of love for friends and strangers alike. She had a smile that would light up the room and loved to make people laugh; but she was also tenacious—a fiery red-head who helped raised her siblings when her father left and her mother was incapacitated, who was advocating for racial justice in the deep South in the 1950’s, who was passionate about giving at-risk children a chance to creatively learn at their own pace, and who had a heart to love and serve those who had been overlooked or mistreated by others. She will be missed by all who knew and loved her, but her legacy will be the continued imprint and impact she made as she lived each day in, for, and through Christ.

No funeral service is scheduled at this time due to COVID-19, but memorial donations may be sent to Cookson Hills (www.cooksonhills.org) and Hanging Rock Christian Camp (www.hangingrock.org).