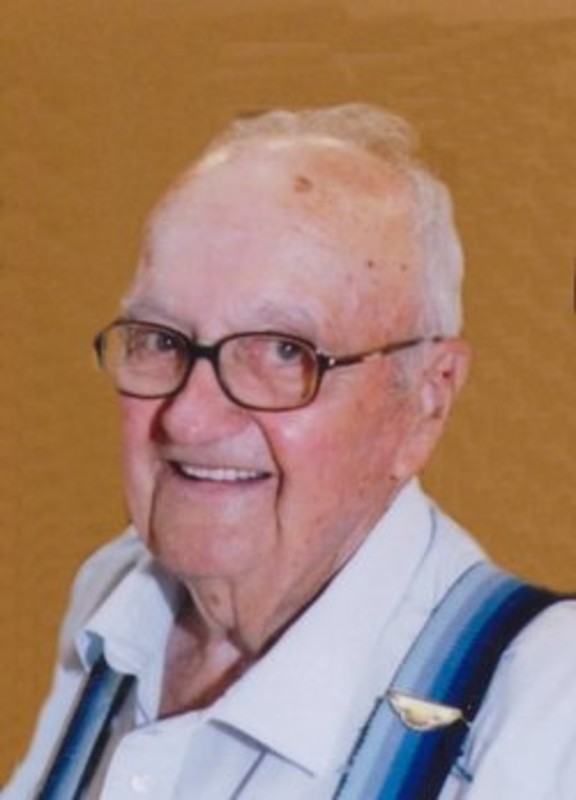 Robert “Tomato Bob” O'Neil, 93, of Cumberland Pointe Assisted Living, West Lafayette, passed away at 11:00 a.m. on January 9, 2015 at St. Elizabeth East Hospital in Lafayette. He was born July 23, 1921 in Goodland, IN, the son of the late Frank and Clara (Bossung) O'Neil. He graduated from Goodland High School in 1939 and attended St. Joseph College, Rensselaer, IN before heading off to serve in the Army during WWII stationed on Bora Bora from 1942-45. He married his high school sweetheart, Elma Jean Hawn, on April 7, 1945 in the St. Peter & Paul Catholic Rectory, Goodland. Their union was blessed for 69 years. He was a devout Catholic and member of the Holy Name Society. Bob delivered milk with his dad and brother, Gene, for the O'Neil Dairy, farmed his Grandpa Bernard O'Neil's farm and the Klinker farm in Goodland. He raised and showed purebred Yorkshires receiving a Reserve Champion Boar ribbon at the Indiana State Fair. In 1966, Bob moved to Lakeside/Buffalo, IN to farm and purchase hogs at the Monticello Buying Station. Later he worked for Wilson Packing, Logansport. Bob continued his expertise in the hog industry to manage the Sullivan Co. Stockyards in Sullivan, IN. He and Elma Jean fried up some great tasting chicken and doughnuts at the O'Neil's Restaurant. They also resided in Paxton, IN where he could fish in his pond. In 1987, Bob retired and moved to Lafayette where he started O'Neil's Produce. For 25 years many customers looked forward to a fun conversation and taking home his Celebrity tomatoes and candy onions. Working the soil along with splitting wood for a warm fire set his example of hard work and accomplishment. His gourd birdhouses made in his shop are still hanging in trees. Other hobbies were to sing in the choir, converse about a good basketball game, share his Bingo candy with grandchildren and compete on the Top Resident Wii Striker Bowling Team. Surviving with his wife are his six children, Kathryn (Kathy) McGraw (husband, John) of Lafayette, Sharon Cofer (husband, Tom) of Michigan City, IN, Dr. Patrick O'Neil (wife, Mindy) of Lafayette, Mary Ann Douglas of Indianapolis, Dr. Nicholas O'Neil (wife, Debi) of Lafayette and Tony O'Neil (wife, Monica) of Lafayette. 3 Sisters, Martha Lou Smith, Creasy Springs Assisted Care, Patricia Smith, Goodland and Mary Shelton of Lafayette. 2 Brothers, Gene O'Neil, Cumberland Pointe Assisted Living and John O'Neil (wife, Judy) of Monticello. 17 Grandchildren, Rob, Mike, Missy, Molly, Matt, Tom, Sarah, Patrick, Pete, Erin, Amy, Nicholas, Allison, Veronica, Ben, Marissa and Emily. Also 35 Great Grandchildren. Rosary service at 4:45 with visitation from 5:00 – 8:00 (EST) on Thursday, January 15, at Soller-Baker Funeral Home, 400 Twyckenham Blvd., Lafayette. Funeral mass on Friday, January 16, at 10:30 at St. Lawrence Catholic Church, 1916 Meharry St., Lafayette. Internment at 3:00 (EST) at Mt. Calvary Cemetery, Goodland, IN.