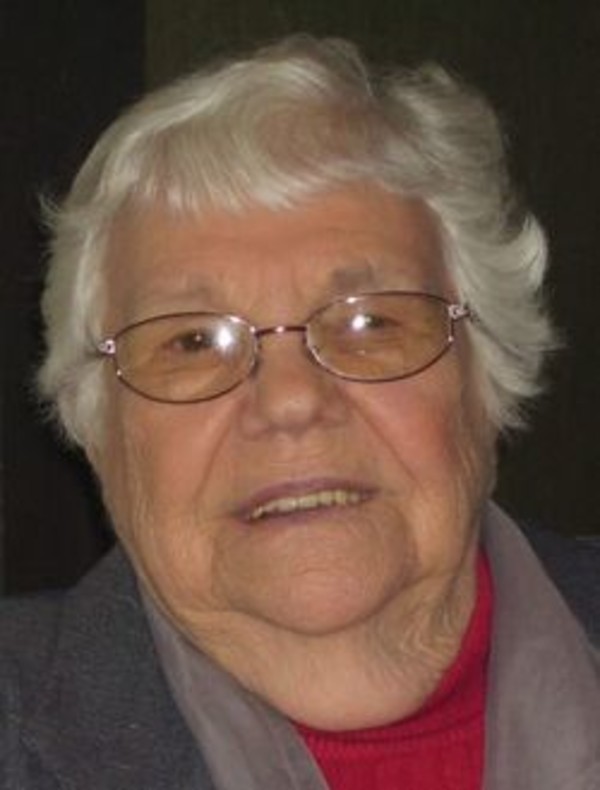 Marie D. (Watkins) Mourning passed away peacefully in her sleep at 10:00 AM the morning of January 12, 2013. She was born February 10, 1920 to Ethel and Lewis Watkins in Illinois. She was one of eleven children. Deceased are Homer Watkins, Thelma Funk, Elwood Watkins, Henry Watkins (Hank), Norwood Watkins, Agnes Watkins, Glyda Snyder (Pied) and Neva Watkins. Surviving siblings and best friends are Minnie Spurgeon of Lafayette, Joseph Watkins (Joe) of Lafayette, and Myrtle Garrison of Watseka, IL. She met Alva R. Mourning who was delivering milk while she was working in the home of Veronica and Michael Ricks. They married July 30, 1938 and lived all fifty-eight years of their married life in Lafayette. He died in 1996. She and Alva had three children, Donna M. Conard (deceased 2011), Barbara A. Amos, husband John (Jack) of Lafayette and William R. Mourning (Bill) wife Jenny of Tierra Verde, Florida. Marie was a waitress and hostess at Sarge Biltz Restaurant which was at the corner of State Road 52 and 25 North where she met many celebrities, one of which was Bill Cosby who was performing at the Elliot Hall of Music. She loved to cook and was able to make leftovers like a new meal. She would prepare wonderful dinners on Sunday and always fixed plenty because many family and friends would come to visit back in the days when people visited one another before television. She and Alva opened their home to any family member who needed a place to live while securing a new residence for themselves. One niece recently said “she was the heart of our family”. After Alva died her brother Joe built an extension to their church, Truth For Today where she lived for several years. While there she assisted him boxing Bibles and other literature for distribution, assembling their newsletter which was mailed all over the world, doing the accounting answering phones where she became friends with many who still called or wrote notes to her. When he retired due to health she continued to volunteer her services until her body could no longer manage the heavy work and she moved in with her daughter Barbara and son-in-law Jack whom she thought of as her second son and cross word buddy. She wasn't physically able to get out and around but her mind was very alert and active. She spent her days having phone conversations, writing notes, studying her Bible, reading fiction and non-fiction literature and enjoyed the challenge of many types of word puzzles. She looked forward to the days her son Bill and wife Jenny would come and stay with her which they did many times throughout the years and gave her daughter and son-in-law time away. The last time was December 10th to December 23rd. In 2009, she became ill with congestive lung and heart conditions and was placed on in-home hospice care January 13, 2010 and given three to six months to live which became just short one day of making it a two-year loving and caring relationship with the IU Health Hospice Team. She had excellent care from nurse Valerie, sub Claudia and those who pampered her with wonderful baths, Alisa and Maylana. Under their constant care she lived a blessed life until the end. She also had thirteen grandchildren: Cynthia Conard, Perry Elliott (wife Karen), Steven Eric Conard (wife Elizabeth), Catherine Raines (husband Jason), Thomas Conard (wife Christie), Jerry Conard (friend Michelle Tramel), William Conard (wife Michelle), Joseph Conard (friend Kayla Green), Christine Watt (husband Christopher), Vicki Pearl (husband Jim), Christopher Amos (deceased 2011), Colby Mourning Kesoyan (deceased 2006), Tyler Mourning (deceased 1997), seventeen great grandchildren and Those wishing to contribute may do so in her memory to I.U. Health Hospice, 3900 McCarty Lane, Lafayette, IN 47905 so that others may benefit from the care she received. Many receive rewards in their life but the most lasting one is to receive Christ as your savior and to one day be with him and hear him say “well done, thou good and faithful servant; you have been faithful over a few things, I will make you ruler over many things: enter thou into the joy of thy Lord”. Matt 25:21 Visitation will be from 5 to 8 pm Friday, January 18, 2013 at Soller-Baker Lafayette Chapel 400 Twyckenham Blvd Lafayette, IN 47909. A graveside service will be held 11:00 am Saturday, January 19, 2013 at Tippecanoe Memory Gardens West Lafayette. A luncheon will follow at the home of Jim and Vicki Pearl Farm, 3926 W. 750 N., West Lafayette, IN 47906 maps will be available at the funeral home.