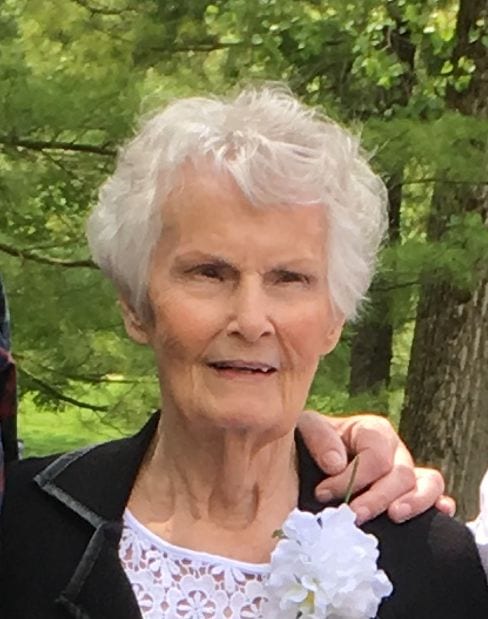 Lois (Smith) Wayne was born in Decoy Kentucky on March 29,1932 and passed at her home and in her bed on February 25,2020 in Lafayette Indiana, with her loving nurse, Tammy by her side.  Her parents were Laura Davis- Smith and Charlie Smith. She is preceded in death by her husband George Donald Wayne and her younger brother Ray Smith. She was the third oldest of 10 children. She is survived by her son George David Wayne of Kokomo, Indiana and her grandchildren Amanda Elizabeth Moore and her husband Andrew and her grandson George David “Sonny” Wayne III and his wife Katie and her great granddaughter Lillian Elizabeth Wayne all of California.  Also surviving are her siblings Phylis Mow, Wilgus Smith, Jewel Hazelgrove, Gail Felike, Mary Ann Roberts, Frieda Passmore, Brenda Gibson and Debbie Humphery. In the sake of brevity there were many such nephew’s

and nieces but you know who you are, otherwise I could be here for days and the newspaper might run out of ink and the internet might collapse from too much information  You get the idea that there is a bunch of her kinfolk or the list is very long. She married a wonderful man that her older brother Wilgus introduced her to, my dad. His name was George Donald Wayne who passed away on March 7, 2016. As the story goes my dad was dating a gal and much not was happening between them, so my uncle Wilgus stated dating dad’s old “girlfriend “.  Soon thereafter Wilgus introduced my mom and dad to each other, and dad told Wilgus “maybe you won’t steal this one from me“all in good humor. They stuck together through thick and thin for the rest of their lives.  Mom and dad had two other baby boys after me, but they died at birth from at then called a compatibility blood known as RH factor. Mom had a unique gift and that was the gift of hospitality. She entertained unknown hours and numbers into her home for countless meals together for her entire life. In fact, that feeling needing to “entertain “her guests followed her until the very end. She confided with her hospice chaplain, Pastor Rick, that she was ready to die and we, as her family knew how hard it was to see her slip away and it was exhausting for her. In fact, her sisters and I agree that she chose the time of her death as to be most comfortable for herself and least sorrowful for the rest of us. She was the “hostess with the mostess” until her dying day. My dad was a great man of faith and he introduced mom to the faith of the Seventh-Day Adventist church. They were lifelong members until they drew their last breath.   Her family is comforted by the belief and faith that we will all be together again in the presence of the Lord if only we choose to accept the unearned gift of salvation through the sacrifice of Gods only son Jesus. A memorial service will be held later at the Lafayette Seventh-Day Adventist Church, 3509 Soldiers Home road, West Lafayette, Indiana 47905. Please don’t send flowers because mom can’t smell them. If you must send flowers let them go to an American warrior that has sacrificed so much for us. There are only two people that have been or are willing to save your lives. The first is Jesus Christ who died to save your soul. The other is an American service man or woman that will give unto us the freedoms we take for granted. Instead of flowers please donate to Saint Jude’s Hospital, or Wounded Warriors Project .