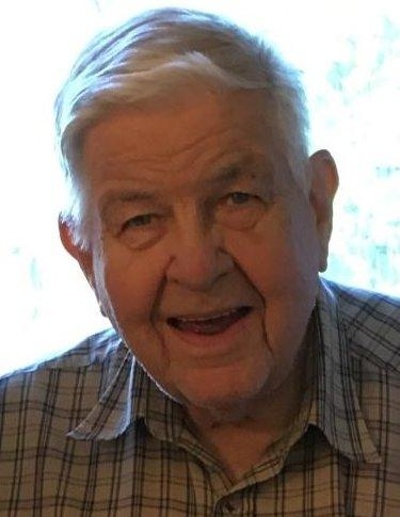 Ken was a true gentleman and family man. He was always there to lend a hand and he never met a stranger. He was kind, caring, lively, and good-natured. Ken always saw the best in people. He was a bit of a jokester and enjoyed making people laugh.

Ken especially enjoyed taking his family to the ocean and the lakes on vacations. He played golf and was an avid fan of the Chicago Cubs and the Purdue Women’s Basketball team. He loved playing with his dogs Mittens, Heidi, and Peanut.

Ken was born on February 22, 1932 in Fort Wayne, In. to the late Clifford J. Westerhausen and Myrtle L. (Welch) Westerhausen. He graduated from Northside High School and attended Indiana Business College studying accounting. In 1952, Ken joined the Navy and met his first love, Helen, while stationed near New York City.

Ken married Helen Byrne on December 6, 1952 and had two children Kenneth and Susan. They lived in Queens, New York until 1969 when they moved to Fort Wayne, In. Ken worked as an accountant and comptroller at various organizations including Lutheran Homes. In 1989 Ken and Helen relocated to West Lafayette, In. to be near their grandchildren. Helen passed in 1993.

Ken most recently resided at the Indiana Veterans Home (IVH) where he participated in many activities. He especially liked piloting a dream flight offered through Ageless Aviation, sailing on the Madam Carroll, and cheering on the National Veterans Awareness Motorcycle group as they arrived each year at the IVH. Ken wanted to express his gratitude to the IVH staff especially the nursing staff on Mitchell 2CD and Pyle 2.

Ken was preceded in death by his parents, wife Helen, and brothers John, Howard and Robert.

A private graveside service will be held at St. Mary’s Cemetery. Donations can be made to Ageless Aviation Dreams at agelessaviationdreams.org