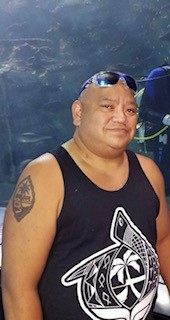 He was born January 2, 1969, in Agana, Guam, to Juan and Bernadita (Salas) Pablo of Wash­ington state.

Joe was a veteran of the Army serving twice being honorably dis­charged both times.

His marriage was to Joleen San Nicolas and she survives.

After the military Joe worked as a engineer spe­cialist for Kirby Risk.

He enjoyed playing golf, pool and BBQ’ing and was very family oriented.

Surviving along with his wife and parents are two daughters, Alyssa (Joshua) Scheeres of La­fayette and Anna-Maria Pablo, two sons, Joseph Pablo, Jr. and Javin Pablo both of Lafayette, a brother, John (Trisha) Pablo and a sister, Mary (Brandon) Pablo both of WA. Also surviving are two granddaughters, Amiyah and Aaliyah Scheeres and his aunt and uncle, Barbara (Bryon) Neubauer of Lafayette.

Joseph was preceded in death by his grand­daughter, Emmarie Julia San Nicolas Pablo.

Per Indiana State COVID restrictions facemask and social distancing will be required.

Visitation will be from 4:00 pm until the time of the service at 5:00 pm on Wednesday, Janu­ary 27, 2021 at Soller- Baker Funeral Home, 400 Twyckenham Blvd. Lafayette with Pastor Aaron Birk officiating.