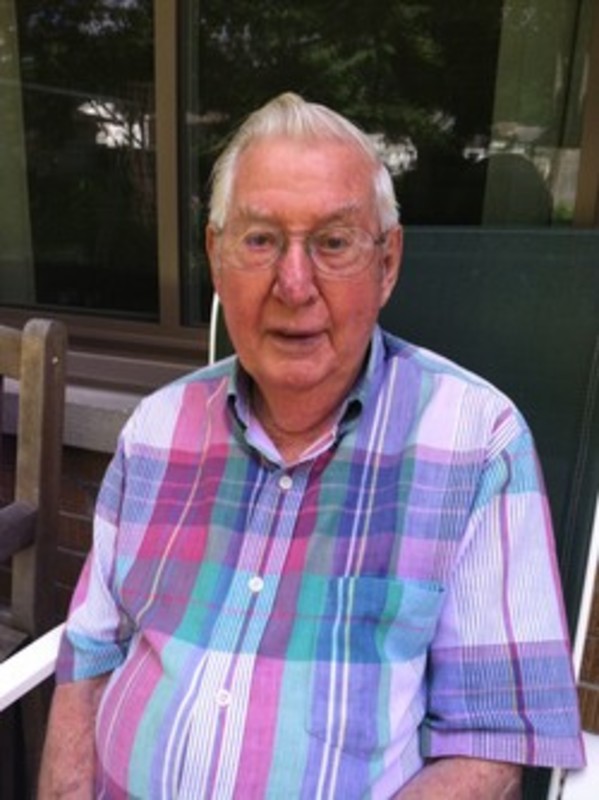 John G. “Jerry” Gross, 90, of Lafayette, passed away at 2:01 am Monday, September 8, 2014 at St. Elizabeth East. He was born July 3, 1924 in Benton County, to the late John Peter and Gladys Ann (Farrell) Gross. Jerry served in the United States Army Air Corps from March 26, 1943 to November 27, 1945. During WWII Jerry completed 9 combat missions while serving with the 8th Air Force for 4 1/2months in the European Theatre of Operations as a radio operator and mechanical gunner on a B-24 Liberator Bomber. He liked to tell stories about WWII, especially the one about the bomb door freezing shut and the only way to open it was to deploy the bombs. He graduated from Purdue University in 1950. On February 16, 1946 he married Helen Morgan in Attica and she survives. Jerry was an award winning salesman for Allied Mills, Wayne Feed Division before retiring in 1982. Prior to that, he worked in sales for Lederle Laboratories. Jerry enjoyed spending time with his family, grandchildren and now the great grandchildren, sharing a good meal, and was an avid Cubs fan always hoping for one more pennant. Surviving along with his wife, are two daughters Cathy Banes (husband David) of Lafayette, Nancy Short (husband Mike) of Tulsa, OK; a son John Gross (wife Charlene) of Lafayette; two sisters Eileen Gilham of St. Louis, MO and Margaret O'Toole of Fayetteville, GA. Also survivng are five Grandchildren; Douglas Gross of Lafayette, Emily Babb (husband Kencade) of Dallas, TX, Matthew Short (wife Kristi) of West Lafayette, Jeff Banes (wife Sandra) of Jackson, WI and Scott Banes (wife Carman) of Lafayette along with great grandchildren Audrey, Lillian and Eliana Short with baby brother Short to arrive in December, Cicely, Finnegan and Virginia Babb, Colin and Taylor Banes. Jerry was preceded in death by two brothers, Dr. James E. Gross and Francis “Bud” Gross. Visitation will be from 12:00 noon until the time of the service at 2:00 pm on Thursday, September 11, 2014 at Soller-Baker Lafayette Chapel 400 Twyckenham Blvd Lafayette, IN 47909 with Fr. Don Gross officiating. Entombment will follow at Tippecanoe Memory Gardens with military rites. Those wishing may contribute in Jerry's name to Food Finders Foodbank at 50 Olympia Ct. Lafayette, IN 47909.