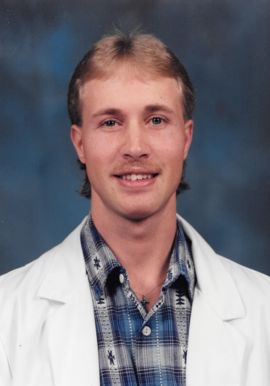 Jeffrey Robert Luce 50, of West Lafayette, passed away in his sleep at home on January 9, 2022, after a brief but courageous fight with cancer. Jeff was born on July 30, 1971, in Lafayette, IN and was adopted by Robert and Mary Ann Luce on September 30, 1971. He was born with the most beautiful blue eyes.

As a young boy he loved nature and explored every inch of the wilderness surrounding his house. He knew where every bird’s nest was in the neighborhood and would often take his mother on a bird nest tour. He was fascinated with butterflies and insects, and at the age of 4 had an extensive collection to rival the science class collections of the junior high neighborhood boys. He was a 1989 graduate of Harrison High School and made many lifelong friendships. He later went on to receive a bachelor’s degree from Vincennes University and graduated in 1996 at the top of his class. He was praised by the university president as an example of hard work, determination, and dedication. Jeff had a successful career in Physical Therapy and received countless kudos from his patients, many of whom he considered friends.

Jeff had a deep love for the outdoors. He appreciated the beauty of the nature all around him. He loved collecting arrowheads and taking pictures of sunsets, critters, and any kind of animal.

He had 3 daughters: Brianna Dazzo 30 (husband Ryan, and 3 grandchildren Makenlee, Kailynn and Samuel), Brenna 25, Baelee 18, and his son River 14. In addition to his children, he is survived by his wife Joy Lee, father Robert (called Ted), and his sister Mary Kay Berndt (husband Brian).

Jeff had the kindest soul, was loved by everyone who knew him, and will be greatly missed. His time may have been cut short, but his memories will last a lifetime.

A memorial service will be held on Saturday, January 22, at 12:00 noon, with a visitation from 10:00 to 12:00, at Soller Baker Funeral Chapel 1184 Sagamore Parkway West, West Lafayette, Indiana. In lieu of flowers donations may be made to Niches Land Trust or the American Cancer Society. You may leave condolences at www.soller-baker.com