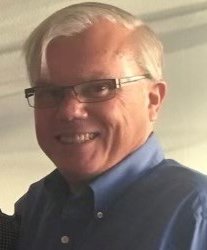 He was born December 9, 1961, in Lafayette, to the late Allen and Margie (Hedgecough) Whitlock.

Jeff graduated from Lafayette Jefferson High School in 1980 and earned his bachelor’s degree in organizational leadership from Purdue University in 1995.

Jeff worked as a Process Engineer for CTS Micro Electronics for several years then worked at Eli Lilly and Company. Later on, he worked in the Journal and Courier printing and shipping warehouse before retiring.

He enjoyed spending time with his grandchildren, being a part of a fantasy football league, playing roulette at casinos, playing daily lottery tickets, watching classic horror movies, yard work and gardening. He was a fan of Purdue football and basketball, as well as a fan of the Indiana Pacers, Indianapolis Colts, and the Minnesota Vikings.

Surviving is a daughter, Richelle (Barman) Whitlock and a son, Cody Whitlock of Lafayette. He is also survived by his brother, Jess (wife Jo) Whitlock, three grandsons: Elijah Doke, Bentley and Greyson Whitlock, friend and companion, Barbara Ray all of Lafayette, as well as several nieces and nephews.

Jeffrey was also preceded in death by his father and mother-in-law, Bob and Elsie Dukes.

Funeral service will be at 10:00 am on Friday, August 19, 2022 also at Soller-Baker Lafayette Chapel with Rev. Joseph Park Jr. officiating.  Interment will follow at Green Lawn Cemetery in Frankfort.

Memorial contributions may be made in Jeff’s name to Crohn’s Foundation Indiana Chapter, 5325 E. 82nd St. Indianapolis, IN 46250.