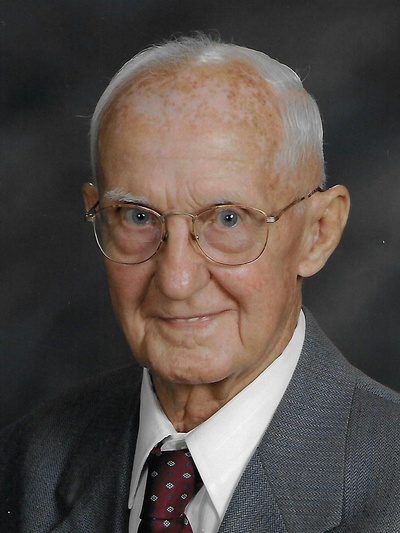 James “Jim” Edwin Richard passed into the hands of God on January 18, 2019 at 4:01 p.m. in the Sarasota home of his son Geary, and daughter-in-law Becky. Jim was born in Lafayette, Indiana on May 3, 1922 to his parents Claude and Bessie Richard who preceded him in death.

He was a lifelong resident of Lafayette before moving to Sarasota, FL in 2016 to live with his son and daughter-in-law for in home care until his death.

Jim served his country during WWII enlisting in the Army Air Corp in 1942. He served in England, North Africa and various bases in Europe. He flew five missions as a ball turret gunner in B-17’s. After those missions he served loading armament in B-17’s. In 1945 at the close of WWII, he served helping transport troops out of Europe to French Morocco on emptied B-17’s. During his service he attained the ranks of Sergeant and Corporal. His honorable discharge was September 18, 1945.

After his discharge he worked at Alcoa in Lafayette. Shortly after he received his apprenticeship as a carpenter in the Carpenter’s Local 215 until his retirement in 1984, working primarily with his brother Eugene Richard. The two were known for being perfectionists in their work. They spent many years remodeling the interiors of the former Purdue National Banks in Lafayette and West Lafayette, as well as other Lafayette/West Lafayette businesses.

Throughout his life, Jim made stained glass and many beautiful wood workings, most of which he gave to friends, family members or his church. After his retirement he made hundreds of wooden toys, shelves, spice racks and many other items for friends and family. Some of the most complex toys took many hours and great precision and patience. Jim gave away every item he made, never selling one. Woodworking was his passion in retirement.

Jim was a child of the depression years and was always wise in his spending. He made sure his family never lacked anything they needed. His family always had hot food on the table, clean clothes and a warm home in which to live. He was a loving provider for his family over the years. If necessary, he always sacrificed his own wants or needs before that of his family.

He was preceded in death by sisters Claudene (Reddish), Rachel (Ryan), Florence (Summers) and Margaret (Shivley); and brothers Elbert and Gene.