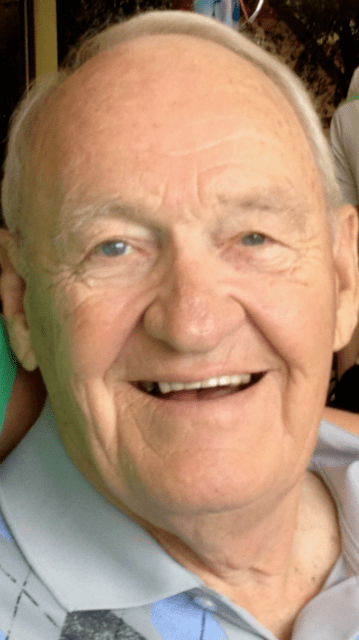 Idris P. (Id) Jones, 85, of West Lafayette, died Thursday, October 17, 2019.
Born on March 31,1934 in Scranton PA (the place Elephants go to die according to comedian Pete Barbutti). Idris was the son of the late Idris and Eva (Powell) Jones. His late brother Tom joked, “he liked to beat up trombone players in high school,” but still managed to make it out of Scranton to Penn State University (Fight on State!), where he would eventually meet his wife of 50 years, the late Mary Louise Walker of Pittsburgh, PA.

Id worked in various careers throughout his life but was probably happiest at the Birck Boilermaker Golf Complex as a “Players Assistant” in his later years, where he met many great friends who loved golfing, sharing a beverage, and telling tall tales. He adored the new friends he met at the Tuesday Lunch Bunch at Nine Irish Brothers that expanded to Thursday and Fridays at Hunters Pub.

He is survived by his sons, who try to be better men, husbands, fathers, brothers and friends because of the example he set – Kyle (Kelly) Jones of Mt. Vernon, IN and Chris (Rhonda) Jones of Lafayette, IN; a sister, Cathy Darragh (Chuck) of San Diego, CA who he loved to visit and laugh with; his sister-in-law Jean Daniels of Richmond, VA, and four grandchildren he was incredibly proud of: Maggie, Walker, Molly and Emily. Uncle Id leaves behind many nieces and nephews whose exploits and accomplishments he loved hearing about. Id loved his boys extended families (and there’s a bunch) and relished being an in-law as much as an out-law.

However you knew him, as Idris, Id, Pop, Pops or the guy at the end of the bar at Hunters Pub, you always knew what a true gentleman he was, and his love for family, friends and complete strangers knew no bounds. Id didn’t want sad songs and maudlin words spoken for him, so a Celebration of Life is being planned for Saturday November 23rd from 2:00pm – 5:00pm at the John Purdue Room at Sgt Preston’s of the North at 6 North 2nd Street Lafayette. The family will be having lunch at noon at 9 Irish Brothers in West Lafayette as well as a quick toast at Hunters Pub in West Lafayette prior to the celebration. These were some of Id’s favorite spots to meet friends.

If you would like to donate to the charity of your choice, please do so. Idris gave to every charity – he had the junk mail to prove it. We love you Dad!