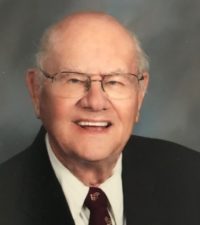 Born on family property in Lansing (South Holland), Illinois Hoey spent his first years in the Dutch community of South Holland, surrounded by family. South Holland, now a suburb of Chicago, was founded in 1846 by his Great-grandmother, the Widow Paarlberg. He was the youngest of four boys born to Henry “Jack” and Grace Int-Hout Paarlberg.

In 1926, Hoey moved with his family to a farm near Crown Point, Indiana where he spent his childhood attending the Riley Elementary School and Crown Point High School, graduating in 1941. For the first years of World War II he continued to work on the family farm before enlisting in the Navy.

After leaving the service, he attended Purdue University, School of Agriculture on the GI Bill. At Purdue, he met the love of his life, Mildred McClamroch. They married on August 6, 1950 and were together for over 50 years until her passing in 2002. They had six children, four of whom survived; Philip Lynn, Larry Steven, Charles Lee, and Martha Diane.

After graduating from Purdue, Hoey worked as a Farm Manager for Farmcraft Services based in Oxford, Indiana from 1950 to 1962. In 1962, Earl Butz, Dean of the Purdue School of Agriculture hired Hoey as a Farm Manager in the Animal Sciences Department. From 1965 until his retirement in 1989, Hoey served Purdue as the Farm Director of the Regional Research Farms.

He served as President of Indiana Society of Farm Managers & Rural Appraisers, President of the Tippecanoe County Historical Association, as corporation president and alumni advisor to the Purdue Chapter of Alpha Gamma Rho fraternity, was heavily involved with the Feast of the Hunter’s moon for over 20 years, was on the board of the Farm at Prophet’s Town State Park, assisted with the Railroad Relocation in Lafayette, was a member of the Lafayette Exchange Club, and a member of Federated Church in West Lafayette.

A private graveside service will be held on Tuesday at Oak Hill Cemetery in Kirklin, IN.   Soller-Baker Funeral Home-West Lafayette Chapel is in charge of arrangements. Memorial gifts may be made to: Tippecanoe County Historical Association, 1001 South Street, Lafayette, IN 47901; Westminster Village Foundation, 2741 N. Salisbury Street, West Lafayette, IN 47906; or a charity of your choice.