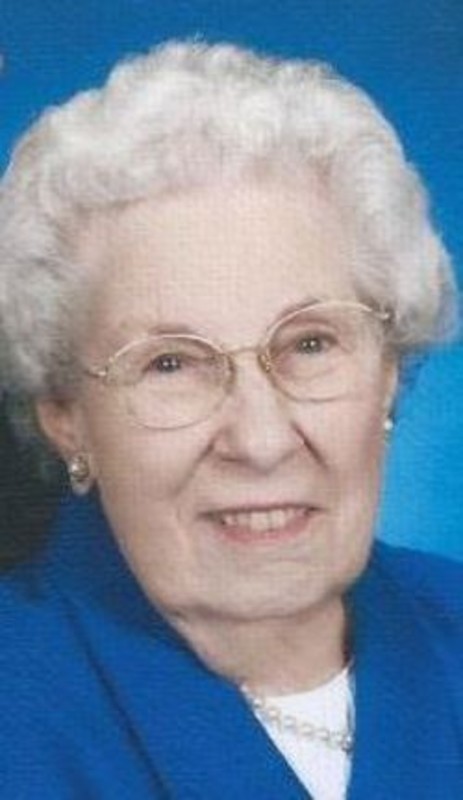 Helen Albright Nesbitt passed away on December 14, 2013. Helen was born on April 7, 1920 to Albert G. H. and Emma Beutler Albright. She grew up on the family farm in Shelby Township and graduated from Montmorenci High School in 1938 and Purdue University in 1942. She married Gene D. Nesbitt on August 11, 1945. They lived in Crown Point before returning in 1954 to the Albright family farm which has recently been recognized as a Centennial Farm. Helen was an active member of Montmorenci Methodist Church and Immanuel United Church of Christ. She was also active in the Order of Eastern Star as a member of Beulah Chapter and as a District Deputy. She had received the Eastern Star Award of Gold. Helen taught home economics and sciences in Merrillville, Crown Point, Montmorenci, Locust Grove, Remington and Tri-County schools. She was a strong supporter of 4-H as a member, parent, leader and community member. Her children and grandchildren have enjoyed and learned much from her cooking, sewing, gardening, crocheting, and crafting lessons. Helen was preceded in death by Gene, her parents, her sister Kathryn Albright, and infant twin daughters. She leaves her sister Evelyn Ramos of Springfield, Ohio, and children Janet L., Donald G. (Pamela), and Richard A. (Olivia) Nesbitt all of West Lafayette. She also leaves four grandchildren Mary Helen (Joe) Halsema, Samuel D. (Jessie), Benjamin A. (fiancé Monica) and Claire A. Nesbitt, a great granddaughter Karli, a great grandson Colton and several nieces and nephews. The family wishes to thank the staff of Westminster Healthcare for their expertise and many kindnesses. In lieu of flowers, the family suggests contributions be made to the Indiana 4-H Foundation, Inc., Agricultural Administration Building, Rm 101, 615 W. State St., West Lafayette, IN 47907-2053 or a charity of choice. Visitation will be Tuesday, December 17 from 5:00 to 8:00 PM at Soller-Baker West Lafayette Chapel, 1184 Sagamore Parkway West, with Eastern Star services at 7:00 PM. The funeral service will be on Wednesday, December 18 at 10:30 AM at the Soller-Baker West Lafayette Chapel with Pastor Gary Sims officiating. A private burial service will follow.