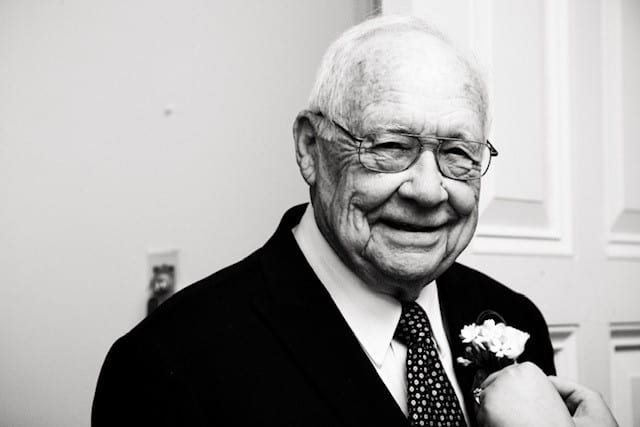 He was born to Herman G. Goetsch and Myrtle E. Goetsch on April 6, 1923 on a farm in Colby, Kansas. He graduated from Sabetha High School in 1940. He was vice president of his class and was active in baseball, basketball, and football. He attended Kansas State University (KSU) on a scholarship from Sears and Roebuck. After one year of undergraduate work, he entered KSU Veterinary School in 1941 and graduated in 1945. He was a member of the Alpha Gamma Rho fraternity at KSU. He was enlisted into the Army while attending Veterinary School. After graduating from Veterinary School, he met Barbara Garrett in Kankakee, Illinois while in private practice. They married in 1947. She preceded him in death on January 11, 2003.

Gerald took teaching positions at University of Missouri and Oklahoma State University prior to moving to West Lafayette in 1952. He began graduate work in the School of Veterinary Science and completed his PHD thesis. He was given responsibility to initiate what was to become the School of Veterinary Medicine. He was very involved in the architectural development of the physical facilities of the school.

Following legislative funding, the School of Veterinary Medicine opened in 1959. The first class consisted of 40 students. He became the Head of Veterinary Physiology and Pharmacology in 1959.

During his tenure in the Veterinary School, he served as president of the American Association of Veterinarian Physiologists and Pharmacologists for two terms. Following his sabbatical in 1979, he again became a full professor in teaching and research.

After retiring in 1988, his hobbies included golfing, bowling, and carpentry. His pride and joy were 16 child Lincoln Rockers that were caned and made of walnut. Some were actually auctioned off for charitable donations to the Vet school and the others for each of his grandchildren.

Gerald is survived by his three daughters, Lynn (Jim) Miner, Orlando, Florida, Barbette Griffiths, Sarasota, Florida, and Lisa (Tom) Seeger, Kildeer, Illinois, as well as 7 grandchildren and 4 great grandchildren. Along with his wife, he was preceded in death by his parents, brothers (Dale and Dennis), and son-in-law David Griffiths.

He was interred with his beloved wife, Barbara, in a private ceremony in Grand View Cemetery on January 16, 2021.

You may leave condolences and memories at (www.soller-baker.com).