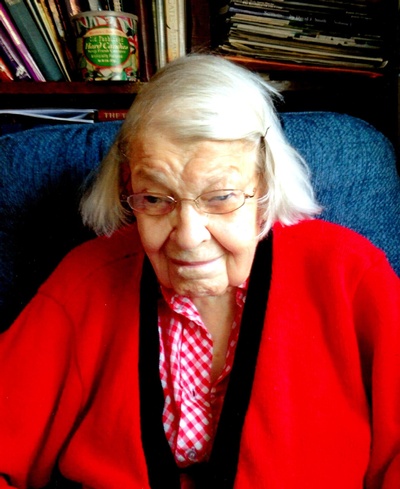 Enola Myrta Ella Oehrtmann Ruff, age 101, passed away on January 4, 2019 at Rosewalk Village after a brief illness. She had been a resident there for over 11 years. She enjoyed living there and the staff and residents loved her.

She was born on April 1, 1917 in the rural area of Dayton, Indiana. As a child she attended Wea School until second grade then moved to St. James Lutheran School until the eighth grade. She graduated from Jefferson High School in 1935 and secure employment after graduation as a bookkeeper at Decker’s. She lived in the Lafayette area except for a brief time during World War II when she lived in Miami, Florida where she met Adolf Erick Ruff. They married and moved to Colorado. After several years of marriage, they returned to Lafayette where her parents resided. She never again left Lafayette except for occasional vacations.

When she returned to Lafayette from Colorado, she worked for Ralston Purina. After employment there, she accepted a position as a technical typist in the Department of Agronomy at Purdue University, and she remained there for 20 years, retiring in 1982.

She was deeply religious. She worshipped at St. James Lutheran Church for many years before transferring to Holy Trinity Lutheran Church. After the death of her father, she attended many of the local evangelical churches. Most recently, she attended the Victory Temple Church of God and the First Assembly of God. When she could no longer attend services, she watched Jimmy Swaggart while she ate her lunch. She also enjoyed Bible studies at Rosewalk Village. They met every Friday afternoon, and she made sure she could attend the service—even if it meant missing the Friday snack, family events, or hair appointments.

For many years, she typed labels for Bibles for the World. She was able to travel to the home office in 1990 where she said, “They treated me like a queen.” When she moved to Rosewalk Village she stopped typing for them, probably due to the noise of a typewriter.

Early in her retirement, she enjoyed working jigsaw puzzles and crocheting. After moving to Rosewalk Village, she changed her hobbies to doing puzzles like word searches, sudoko, and crosswords.

She is survived by one brother, Raymond Oehrtmann of Tiverton, Rhode Island; one daughter, Judith “Judy” Ruff Hanks (wife of William “Bill” Hanks) of Lafayette, IN; two grandchildren Elizabeth Boener, (husband Larry Boener) of Romney, IN and Nancy Forbes, (of Flora, IN). She is survived by 6 great grandchildren: Damien Hanks, Samantha Forbes, Jimmy Forbes, Makena Forbes, Geoffrey Boener, and Erik Boener. She is also survived by nieces, Peg Wright, Sue Cook, and DeDee Milnes, and nephews Dave Goller, Don Goller, George Goller, and Charles Oehrtmann. She has too many great nieces and great nephews to list.

The family wishes to thank the employees at Rosewalk Village for their care and concern for her. They not only took amazing care of her, they loved her. Memorial contributions to charity of choice

Visitation will be held on Thursday January 10, 2019 from 1:00 pm until of service at 2:00 pm at Soller-Baker Lafayette Chapel. Burial at Dayton Cemetery. You may sign the guest book and leave memories and pictures at www.soller-baker.com