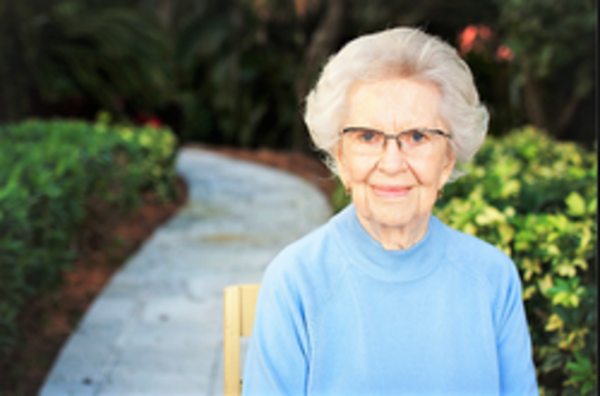 Elinor was born to the late John W. and Ida Ethel (Willis) McClellan on January 27, 1924, in Norfolk, VA.  She graduated with a BS from Mary Washington College of the University of Virginia.  In her hometown of Norfolk, she met and married the late Eugene H. Cox (of Kempton, Indiana) in September of 1944 while Eugene was rising in ranks from enlisted seaman to Naval Lieutenant. Following WWII, they built their home on Northwestern Avenue, near the campus of Purdue University in West Lafayette Indiana, where Eugene attended school in engineering on the GI Bill.  During that time, Elinor taught high school commercial subjects and girls’ physical education at Jackson Township for three years while the couple rented rooms in their home to GI’s who had newly arrived home from war.

During a movie-worthy life together, Eugene and Elinor shared several business ventures starting with Alprodco in Kempton and followed by Spaulding Products in Tipton and Frankfort, Indiana. A family investment in diamond importing from Guyana, South America planted a love of gemstones in Elinor that grew over time. She and her son, John, temporarily moved to Southern California to chase her fascination by studying at the Gemology Institute of America (GIA). In 1973, they graduated together as certified gemologists and came home, becoming the first individuals in Lafayette to hold the GIA certification. Elinor Cox Diamonds was opened on Main Street (courthouse square) in Lafayette in 1977, and was in business until her retirement in 1988. Even after retirement, Elinor took joy in helping family and friends source diamonds for engagement rings and designing her own beautiful pieces.

After Eugene’s sudden passing, Elinor married a longtime family friend, the late John DeCamp, Sr., in 1987. John, Sr. retired from the Purdue University Athletic Department in 1986, as Director of Sports Promotions.  He had broadcast Purdue football and basketball on the radio since 1940, and during the 50’s was known nationally for his accurate play-by-play accounts, earning him the nickname of “the Voice of Purdue,” and later, a spot in the Indiana Journalism Hall of Fame.

Elinor and John were both avid Purdue sports fans, tuning in to the TV or radio for every Purdue football and basketball game. They purchased a house in Arizona in which to escape the Indiana winters and their family enjoyed numerous vacations out West before John’s passing in 2003.

Elinor lived a varied and interesting life. She played piano and kettle drums in her high school orchestra, sang in the church choir and was a voracious reader. During her college years she was a war bond queen and a bathing beauty contest winner. Both gorgeous and educated, she denied numerous marriage proposals before accepting Eugene’s on the steps of the Lincoln Memorial in Washington D.C. She shared Eugene’s interest for flight, completing pilot training and soloing. She had the opportunity to pilot single-engine and twin-engine planes, seaplanes and even the Goodyear blimp. Many of her summers were spent entertaining with Eugene at their lodge on the Cox-owned Big Virgin Island in Canada (Lake Nipigon, Ontario). She was a member of Dayton Memorial Presbyterian Church.

You are invited to sign the guestbook and leave memories by visiting www.soller-baker.com. Memorial contributions may be made payable to Purdue Foundation c/o John DeCamp Future Broadcasters Scholarship Fund, 403 West Wood St., West Lafayette, IN 47907