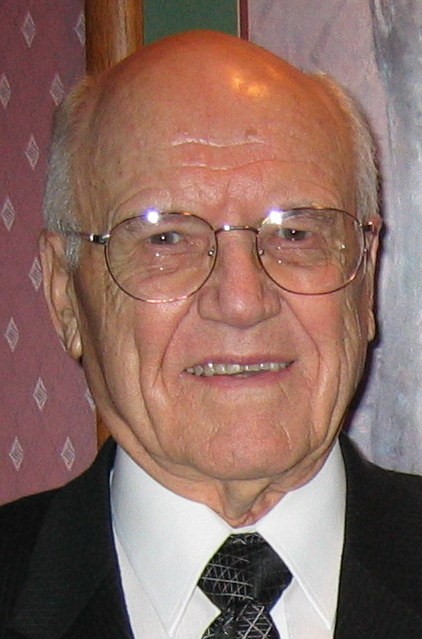 Curtis Lee Smiley of West Lafayette passed away on Friday, May 15, 2020.  He was 98.  Curt was born on October 8, 1921, outside of Rochester, Indiana, to Edith (Haimbaugh) Smiley and Glen Smiley.  Curt graduated from Stockland, IL, high school in 1939.  He attended the University of Illinois and earned a B.S. in Agriculture.  During his senior year at U of I, he was inducted into the army as a sergeant.  He lived with other inductees and attended classes in uniform.  Upon graduating with honors in 1943, he started OCS in October and eventually became a paratrooper.  In 1945 he was with the 82nd Airborne Division in Europe, and, as a second lieutenant, he was assigned to lead the defense platoon which guarded the Division Headquarters during WWII.

Upon returning to the USA from the war in 1946, he was eventually separated from the army on May 22, 1946.  On December 1, 1946, he married Lois Lee Hayes of Lawrenceville, IL, whom he had met years earlier at U of I.  They observed their 73rd wedding anniversary last year.

Curt became an investment partner in a Chicago heat treating business, where he worked for a year before deciding that was not what he wanted to do in life.  He found his passion as a teacher and taught high school in Stockland and Sheldon, IL, from 1947 – 1951.  During that time, he also served in the army reserves.

In 1951 he was re-inducted into the army during the Korean War and eventually served almost 16 months, with nine months being in Korea.  During that time, he received the Bronze Star for his meritorious service as Company Commander.

In 1952 Curt returned to teaching at Stockland.  In 1961 Stockland High School consolidated, and Curt continued his teaching career at Fowler High School until 1965.  In the fall of 1965, he was hired to teach junior high science and later biology and advanced biology in the West Lafayette Community School Corporation.  Curt completed a Master’s of Science (1965) and a PhD (1973) at Purdue.  In 1975 he received the Biology Teacher of the Year award for the State of Indiana.

Curt enjoyed attending Purdue football and basketball games for many years with his son.  He was a lifetime member of The American Legion Post 38, a member of the Purdue Alumni Association, a former member of Kiwanis and Phi Delta Kappa, and a member of Covenant Church.  He also volunteered at the Indiana Veterans’ Home for many years.

Curt and Lois spent 17 winters in their Venice, Florida, home where they volunteered at the Venice Memorial Hospital and Pine View School while enjoying the sunshine and warm Florida weather.

Curt is survived by his son, Thomas (Deborah) Smiley; his daughter, Lisa (David) Heinze of Elburn, IL; four grandchildren, Colleen Weinzapfel (Nick); Kirk Smiley (Lynne); Chad Heinze; and Cameron Heinze, and by three great-grandchildren.  In addition to his parents, he was preceded in death by his wife, Lois Lee, two brothers, Arthur and Everett, and a sister Louise.

In lieu of flowers, donations may be made to the West Lafayette Schools Education Foundation 1130 North Salisbury Street, West Lafayette, Indiana 47906.