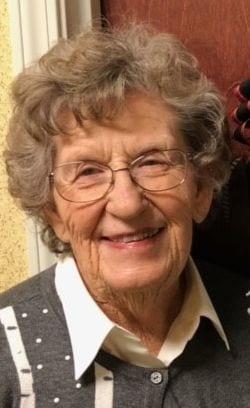 In lieu of flowers, the family requests memorial donations to: Randolph Volunteer Fire Department,  PO Box 92, Romney, IN 47981 or to Riley Children’s Foundation, 30 S. Meridian St., Suite 200, Indianapolis, IN 46204 or at give.rileykids.org.

Carol A. Fifer Kerkhoff, 92, of Romney, died Thursday, March 25, 2021, at Creasy Springs Health Campus.  Born August 14, 1928, she was the daughter of the late Walter and Luella Summers Fifer.  She graduated from Romney High School and married John H. Kerkhoff at St. Mary’s Cathedral in Lafayette in September 1947.  Carol and her beloved Johnny were married for 52 years until his death in 1999.

She was a member of St. Boniface Church and a 60-year member of the Randolph Home Ec Club. Prior to her marriage, she worked at Purdue University.

Regardless how you knew her – wife, mother, grandmother, friend, neighbor – she was dedicated and loyal.  She was an excellent cook and was well-known for her huge, delicious chocolate chip cookies and homemade fudge sauce on Schwan’s ice cream.  Carol always cherished visits with grandchildren and their families.  The children were entertained with trips around the farm and filled with wonderful treats of Carol’s baked goodies.

Carol was a compassionate person who took loving care of her Grandmother Summers, her brother, Davey, as well as her parents, Walter and Luella, in their respective time of need.  She always put others first, a true example of her Christian faith.  She had great love for her family and her family has great love for her.

She is preceded in death by her brother, David; brother and sister-in-law, Gordon and Mickey Fifer; and her sister and brother-in law, Barbara and Dean Swank.

Carol’s family would like to thank the wonderful staff at Creasy Springs Health Campus for their excellent care the past two years.  In addition, the family also appreciates Franciscan Hospice Care, especially Darin, for keeping Carol as comfortable as possible her last days.

In lieu of flowers, the family requests memorial donations to:  Randolph Volunteer Fire Dept (PO Box 92 Romney IN 47981) or Riley Children’s Foundation (30 S Meridian St, Suite 200 Indianapolis IN 46204 or give.rileykids.org). Due to Covid-19, the funeral will be private for immediate family conducted by Father Andrew Dudzinski on Wednesday, March 31 at 11:00 at the Soller Baker Funeral Chapel.

In lieu of flowers, the family requests memorial donations to: Randolph Volunteer Fire Department,  PO Box 92, Romney, IN 47981 or to Riley Children’s Foundation, 30 S. Meridian St., Suite 200, Indianapolis, IN 46204 or at give.rileykids.org.