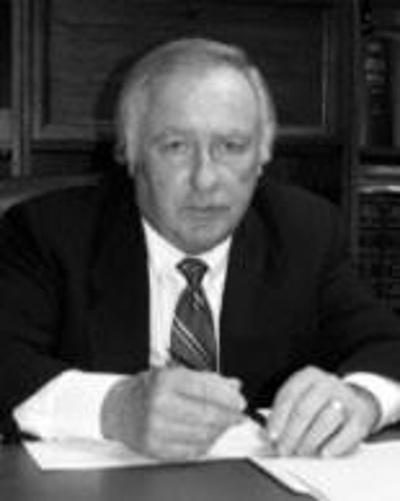 Carl J. Sandy, 84, of Lafayette, passed away peacefully on Friday, August 2, 2019 at Franciscan Health St. Elizabeth East surrounded by his wife and sons. He was born March 26, 1935, in Cairo, OH, to the late John and Julia Flynn Sandy.

He was an Attorney in Lafayette, admitted to the bar in 1966. He did his undergraduate studies at Butler University and graduated from Indiana University School of Law (J.D. 1966).  On December 23, 1979, he married Carol A. Eberle in Kona, Hawaii and she survives.

Carl was recognized by the Indiana State Bar Association for 50 years of service to the legal profession. He was a member of the Phi Delta Phi fraternity; Law Clerk, Appellate Court, Indiana 1965-66. Member: Tippecanoe County (President, 1966), Indiana State and American Bar Associations; Association of Trail Lawyers of America. He was also a Master Fellow, Indiana Bar Foundation.

He was an avid golfer and had a passion for open wheel racing. He was a lifelong member of the USAC. His team, Sandy Racing, was known for the yellow #16 Midget. The proudest moment in his racing career came at the hands of veteran driver Tom Bigelow in 1984 when Bigelow piloted the #16 to win the National USAC Midget Championship. His son, Matt, and others continued to drive the #16 throughout the 90’s and beyond.

Surviving along with his wife are his sons Duane A. (Toni) Sandy of Ft. Walton Beach, FL, Matt S. (Kelle) Sandy of Lafayette, C. Troy Sandy of Lafayette, his grandchildren Mason Sandy, Myka Sandy, Laura Sandy Dias Garcia and 3 great grandsons.  Visitation will be from 3:00pm until the time of the memorial service at 7:00pm on Friday, August 16th at Soller-Baker Lafayette Chapel, 400 Twyckenham Blvd. Fr Bob Klemme officiating.

Memorial contributions may be made to Connected In Motion, 34 River Street, Toronto, ON M5A 3N9, Canada – a charity focused on diabetes education, to honor his son, Troy Sandy, recently diagnosed with Type1 diabetes. Please note “Adventure Team-Troy Sandy” on memo.