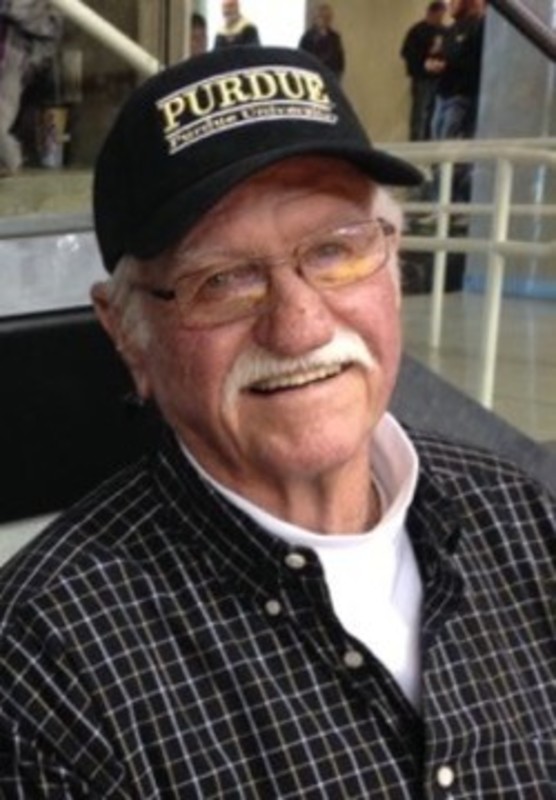 “Big Bob”, William Robert Probasco, of West Point, IN made his last turn in the cornfield on February 19, 2018.  Born to John Sherman Probasco and Carrie (Meharry) Probasco on February 28, 1933, Bob spent all 84 of his years lovingly tending the earth; calling Jackson Township his home.  He is survived by his beautiful wife of 64 years, Barbara Joan (Barker) Probasco of Romney.  The happy couple met at a Rural Youth Meeting of Tippecanoe County 4-H, way back in 1949.  Rumor has it that Bob asked if he could take Barbara home after the meeting, to which she obliged, much to the chagrin of the fellow she came with!

It didn’t take long for the 1951 Jackson High School Spartan graduate and the 1952 Romney High School Pirate graduate to discover they would spend the rest of their lives together.  Married at Romney United Methodist Church on November 28, 1953 – Bob and Barbara set out on a journey that took them to the farm at West Point, followed by 2 years in the United States Army where Bob served his country proudly during the Korean War.  When they returned home from El Paso, TX and Detroit, MI; they settled on the farm and raised 4 daughters.  God only blesses the special farmers with 4 daughters and no sons!  But Bob rolled with the punches and taught them all how to drive a tractor, load corn and beans in the planter, clean out the hog barn, climb to the top of the grain bins, ear notch hogs, bale hay and herd cattle.  Along with that came a few lessons on how to perfect the proper layup from “Mr. Basketball of Tippecanoe County 1951” and how to chase the hogs really fast so those daughters would win a few track races in their time — just like Bob did back in the 1950’s!

Bob loved serving his community by volunteering his time over the years to the Tippecanoe County Parks Department Board of Directors, Jackson Heights United Methodist Church Board of Trustees, Tippecanoe County 4-H Fair Board of Directors, and the Southwestern and McCutcheon Athletic Booster Clubs; along with countless school projects, floats, hayrides, tractor pulls — you name it — Bob was always willing to lend one of his big, strong hands.  And there’s probably not a family left in Tippecanoe County who hasn’t borrowed the wooden dance floor he made – it has seen everything from weddings to square dances to graduations!

Bob was also a proud 32° member of the Scottish Rite, serving on the Membership Development Committee and a lifelong member of the Indiana FreeMasons Shawnee Lodge 129.  In all of that, there probably isn’t a basketball gym, track, volleyball court, football field, baseball diamond or soccer pitch that Bob didn’t either play on or watch a daughter or grandchild play on!  A fixture at sporting events from Purdue Basketball to little league, everyone always knew “Bob, Dad, Papaw” would be there along with “Barb, Mom, Grandma”.  Together, they built a legacy of community service, civic duty and love that touched the lives of many throughout Tippecanoe County and beyond.

Friends may call at Soller-Baker Funeral Home, 400 Twyckenham Blvd. Lafayette, IN on Saturday, February 24, 2018 from 11:30am – 2:30pm.  Services will be held Saturday at Soller-Baker at 2:30pm with Pastor Chuck Tague officiating. Burial will follow at Elmwood Cemetery, Romney, IN.  In lieu of flowers, the family lovingly requests donations be made in Bob’s memory to the Tippecanoe County Parks Department, 4449 N State Road 43, West Lafayette, IN 47906 or the Jackson Heights United Methodist Church, 6825 State Road 28 West, West Point, IN 47992.