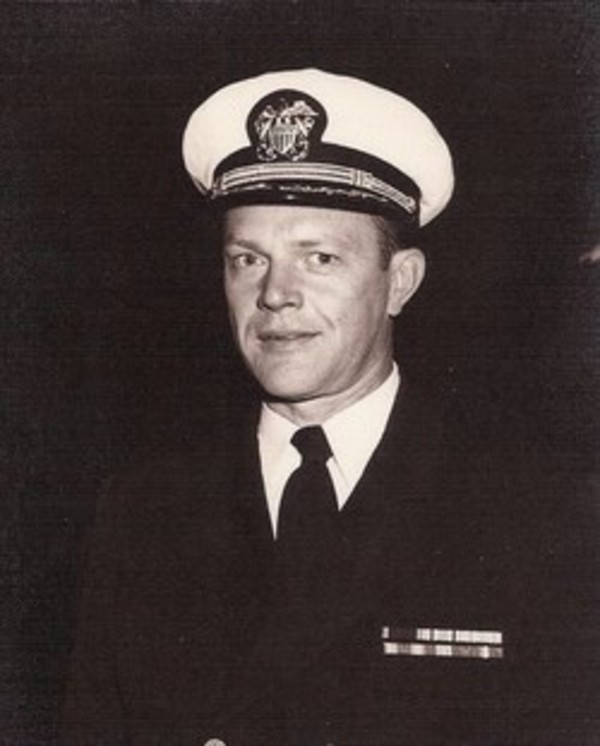 William R. (Bill) Fall was born Feb. 25, 1917 in Appleton, MN to Jean H. (Dobbins) Fall, and Robert B. Fall, and passed away at age 101 on Sept. 4, 2018 surrounded by family at IU Health Arnett Hospital in Lafayette, IN. The family settled in Cincinnati, OH when Bill was 12 and thus began his lifelong love of the Cincinnati Reds. He graduated from Hughes High School in 1935. Like his father, Bill also graduated from Purdue University (bachelor’s degree in Speech Pathology in 1941). Bill was a member of Sigma Pi Fraternity, and served on their Alumni Board. While at Purdue, he was a student announcer for WBAA radio, where he met his future wife, Joyce (Burnham) Fall; they were married in West Lafayette on March 6, 1943. He enlisted in the U. S. Navy in 1941, and served on active duty in WWII as a PT Boat skipper in the South Pacific, and later in the Korean conflict. He continued to serve in the Naval Reserves, retiring in 1969 with the rank of Commander. He was a life member of the Military Officers Association of America.

Bill was employed at radio and television stations in Evansville and Indianapolis from 1941 to 1960. In 1949-50 he and Joyce hosted a radio show broadcast live from their kitchen in Evansville featuring them and their two young children. The family moved to West Lafayette in 1960 onto Blueberry Lane where Bill lived for 54 years. From 1960 to 1971 he held various positions with the Midwest Program on Airborne Television Instruction (MPATI) at Purdue University. From 1971 to 1982 he was employed as Assistant Director for Development, Telecommunications Center and retired from Purdue in 1982.

He was a loyal Purdue Boilermaker (Purdue Alumni Association life member, John Purdue Club member since 1968, and President’s Council). He ushered at Mackey Arena from its opening in 1967 until 2014 (age 97), and supervised ushers and ticket takers at Ross-Ade Stadium from 1967-77. He rarely missed a home game in basketball or football.

Influenced by his sportsman father-in-law Charles R. Burnham, Bill developed a passion for fishing that led to many vacations with family and friends to parts of the Midwest and Canada. He became a member of Lafayette Kiwanis Club in 1962 and held a 37-year perfect attendance record. He held various offices and continued attending meetings until shortly before his death.

Bill loved the Lord and he and Joyce were very active in Covenant Presbyterian Church, West Lafayette. His involvement continued following her death in 1989. From the early 1970s, Bill was involved as leader and teacher in Adult Sunday Bible study and the Bethel Bible Series, was a charter member of the Center for Christian Growth retreat ministry, worked in the Veritas Ministry (lay counseling), and the Yokefellow Ministry. Bill was also on several committees for The PCUSA General Assembly, Synod of Lincoln Trails, and Presbytery of Wabash Valley. He was a member of the Salvation Army advisory board (1982-1985).

After a fall in his home in 2014, he lived at Westminster Village in West Lafayette. He was preceded in death by his wife Joyce (April 9, 1989). Surviving are their children, Bruce A. Fall (Susan) of Minneapolis, MN, Janis Fall of Harker Heights, TX, and Douglas C. Fall (Darla) of West Lafayette. Also surviving are two grandchildren, Gregory Fall (Mary Trueblood) and Grant Fall (Megan) as well as two great grandchildren, Kai Trueblood Fall and Emerson Fall. All will miss him dearly.

A memorial service will be held Saturday October 6, 10 a.m. at Covenant Church in West Lafayette with a private family burial in Grand View Cemetery next to his wife.

You may donate in Bill’s honor to the Lafayette Kiwanis Foundation, c/o Jeff Love, President, 200 Quincey St, West Lafayette, IN 47906.