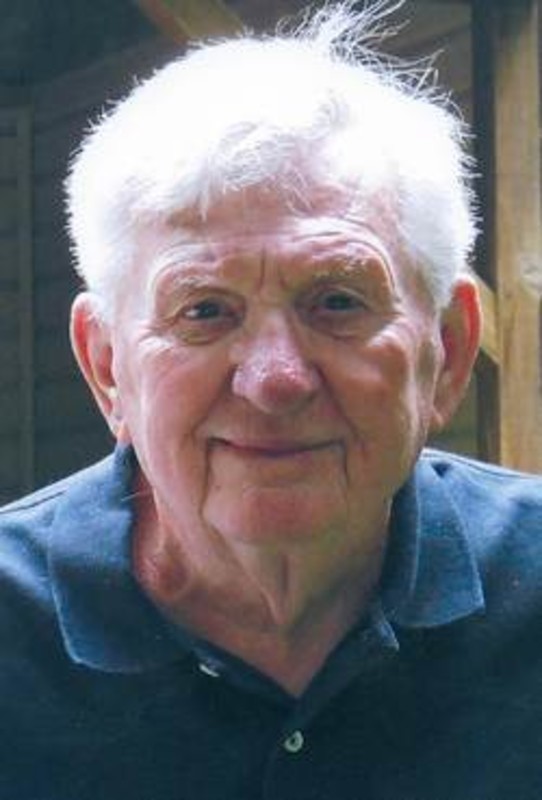 William (Bill) Elton Brooker 86 passed away Sunday January 19 at St. Elizabeth East.Bill was born July 18, 1927 in Whitewater, Wisconsin to Rollin Hartford & Mabel Louise (Niemeyer) Brooker. He graduated from Whitewater High School in 1945 and married Nancy Ann Hathorn on August 27th 1949 at First Lutheran Church in Janesville Wisconsin. They celebrated 63 years of marriage before Nancy's death in March of 2013. During his early years, Bill was employed as a dye maker at Fairbanks Morse in Beloit, Wisconsin, at GM in Janesville, Wisconsin and Highway Trailer in Edgerton, Wisconsin. He and Nancy moved to Kentland, Indiana in 1971, and Bill began a career as a press foreman at Capitol Products (Tredegar Industries) where he retired in 1992. Bill was an avid Green Bay Packer fan, enjoyed golf, and loved playing games on the computer. He always lived to travel; some of his favorite trips were on the train where he traveled around the United State multiple times and on the beaches of Florida with his wife and family. Bill was a man who had a zest for life up until the very end.Bill was a devoted family man who always put his family first; he loved spending every moment he could with family. He is survived by his daughter Sandra Back (Larry) West Lafayette, Indiana. His Grandson's Chad Back (Michele) Fishers, Indiana and Corey Back (Jenny) Brownsburg, Indiana. Three Great Grandson's Connor, Monty, and Miles. Bill has a new great grandchild due in February. He is preceded in death by his wife Nancy, his brother's Roy, Howard, Jim, and Rollin and sister Betty Jacobs.The family wishes to thank Westminster Rehab and Franciscan St Elizabeth's Cardiac care unit for the excellent care and concern Bill received during his illness. Visitation will be Thursday January 23,2014 from 1:00PM-2:00PM Soller-Baker Lafayette Chapel Funeral at 2:00PM Thursday Soller-Baker Lafayette Chapel Reverend James Johnson, Central Lutheran Church, Edgerton, WI to officiate. Entombment Tippecanoe Memory Gardens. . In lieu of flowers a memorial contribution may be made to the American Heart Association.