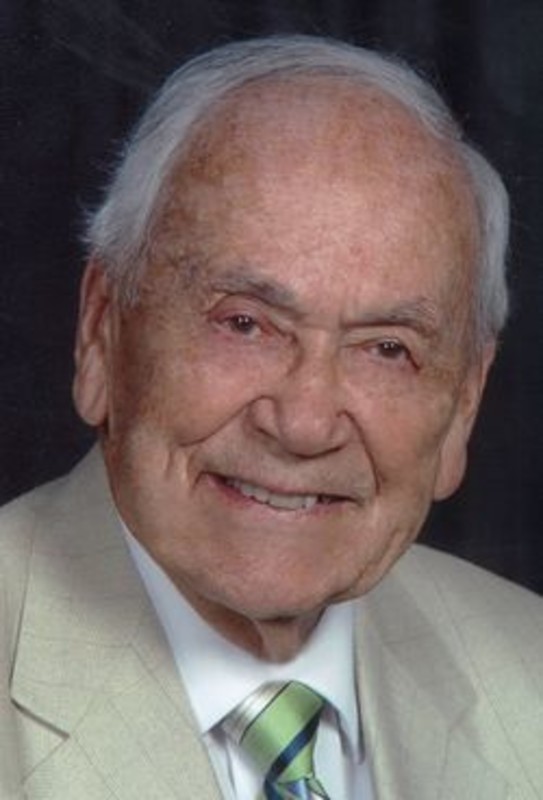 William Charles Andrews, 98, passed away Thursday, January 28, 2016 in West Lafayette. Born December 1, 1917 in Tippecanoe County to William S. Andrews and Clara Kirkhoff Andrews Smith. He met the love of his life, Bonita House in second grade at Dayton Elementary. Bill married Bonnie on November 11, 1944 at Dayton Memorial Presbyterian Church and she survives. A true love story Bill and Bonnie have known each other 90 years and celebrated 71 blissful years of marriage.
Bill graduated from Dayton High School as Class President. He received a Bachelor’s degree in business from Indiana University in 1944. Bill and Bonnie moved to South Bend, IN where he began a job with Studebaker Corporation in the wholesale department and wrote the corporate newsletter sent to the dealers. He was then hired by L.O. Gates Chevrolet to be his General Manager.
In 1957, Bill and his family returned to Lafayette and opened Bill Andrews Oldsmobile dealership. In the following years he acquired the GMC Truck and Mazda franchises. From 1957 until 2008 his dealership delivered more than 50,000 vehicles to the greater Lafayette community. In addition to the quality products and services provided, it is the personal relationships with the employees and customers that meant the most to Bill. He worked with passion until he retired at age 90. Bill was honored as one of the Time Magazine Dealers of the Year.
He was a lifetime members of Elks Lodge #143 and Rotary. He was a member of the Indiana Freemasons, St. Joseph Lodge #45 for over 50 years and a lifetime member of the Ancient Scottish Rite. He was a member of Central Presbyterian Church for over 50 years.
His legacy lives on through his wife, two daughters, ten grandchildren and fourteen great grandchildren. Daughters: Deb Poelstra (Dave), Bonnie Hockema (Bob)
Grandchildren: William Marshall (Vickie), Melissa Cowsert (Rob), Jeffrey Marshall (Megan), Andrew Poelstra, Darcy Knott (Jake), Joshua Poelstra, Ashley Claxton (Brady), Bob Hockema (Amy), Jennifer Hockema, Will Hockema.
Great Grandchildren: Sidney and Taylor Marshall, Lexi Cowsert, Mikylah and Jayden Marshall, Xavier, Gisele and Charlize Knott, Caden, Chloe and Carson Claxton, Charlie, Henry and Hilary Hockema
Preceded in death by daughter Cherie Marshall (Chuck).
The family would like to thank physicians Dr. Kurt Schleck and Dr. Phillip Krause and Dr. John Bauman along with the doctors, nurses and staff at IU-Arnett hospital for their excellent care. They appreciated the loving, compassionate and amazing care provided by the Westminster nurses and staff.
Visitation will be from 5:00pm until 8:00pm on Sunday January 31, 2016 at Soller Baker Lafayette Chapel. Funeral services will be held at 10:30am on Monday February 1, 2016 at Central Presbyterian Church with Rev. David Comstock officiating. Burial will follow at Grandview Cemetery.
Those wishing may contribute in Bill’s name to YWCA of Lafayette-Women’s Cancer Program, Food Finders Food Bank Inc., or Central Presbyterian Foundation.