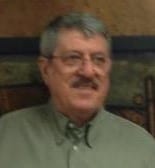 On July 21, 1989, he married Sharon Dienhart Siefert in Lafayette, she survives.

Bill lost his battle with cancer after 2 years of fighting this terrible disease.

He served his country in the National Guard and working as an electrician for ALCOA for 32 years. After retiring, he went to work for Huston Electric for 7 years, taking his final retirement in 2003.

Bill was a member of St. Ann’s Catholic Church, Knights of Columbus, was a 4th Degree Member of the Elks Country Club, and American Legion Post 11.

His favorite time of the year was when he could go deer hunting, mushroom hunting, fishing, and of course a good golf game.

His passion for volunteering involved the Knights of Columbus, selling tickets for the Legion’s Baseball, St. Ann’s, on Sunday Breakfast until his cancer took over.

On his free time, he enjoyed driving all the backroads in Tippecanoe with his Boxer Spencer as co-pilot.

Bill’s wishes were not to have a funeral, just a Catholic-Mass at St. Mary’s Cemetery at time of burial. When it is safe for family members to travel, we will have a Mass-Celebration of his life.