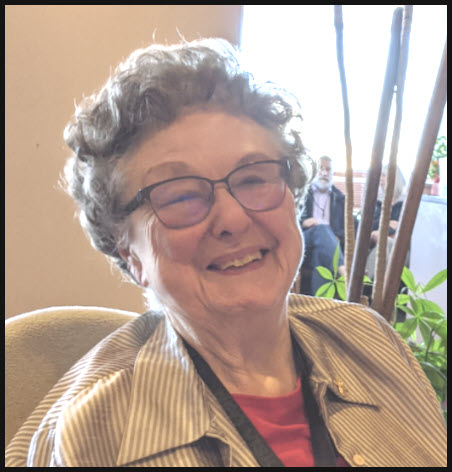 June Yates-McKinniss, age 93, of Otterbein, died unexpectedly Thursday, June 18, at 3:52 p.m. in her home in Otterbein. She exited this life peacefully in her favorite chair, contentedly waiting for her best friend, Don Hayworth, to pick her up for a double date to their favorite restaurant.

Born on January 25, 1927, in New Castle, June was the eldest of four children of the late Charles and Ollie (Dixon) Branham.

June was proud to say that she married the two best men in the world. As an undergrad at Ball State University, June and her fellow coeds heartily welcomed the returning servicemen from World War II. June set her sights on Robert (Bob) Yates when they washed dishes together in the BSU Elliott Hall kitchen, and the romance began. June was a member of Pi Kappa Sigma sorority and Bob was a member of Navajo fraternity and Pi Omega Pi honorary business fraternity. Bob and June were wed on June 6, 1948 and remained happily married until his death in 1995.

After Bob’s death, June met her second wonderful husband, George McKinniss. George and June were wed in 1996 and remained so until his death in 2015. They had a great time traveling, playing cards with friends, and singing and performing together.

A woman of great determination and strength, June’s passions centered around her family, her faith, music, education, teaching, journalism, volunteerism, and travel. She was a life-long learner, and wasn’t afraid to learn a new skill, whether it be making macramé purses or speaking Spanish.

Music was a joy in June’s life, and she remained a talented pianist until the day she died. She was an organist and pianist at Portage First United Methodist Church for 30 years, the Porter County Salvation Army for ten years, and an occasional organist and pianist for the Otterbein United Methodist church for fifteen years. She played at hundreds of weddings, funerals, concerts, and recitals, and gave private piano lessons for 20 years. She was excited to give anyone an improptu lesson, young or old, who expressed an interest. With June jauntily playing the piano, June and George performed in a musical and comedy act throughout Lafayette area care facilities, churches, and meeting halls with George adding humor and pizazz as Tic Tac the clown. In her later years, the Ambassadors singing group was dear to her heart; over the years she served as director, accompanist, music arranger, and cheerleader.

Education and teaching were cornerstones in June’s life. A huge Ball State University supporter, she received her bachelor’s and master’s degrees from BSU, and completed post-graduate work at Valparaiso, Purdue, Indiana, and Indiana State universities. She taught school in LaPorte and Porter county public schools for thirty years and was the co-organizer of the first Portage township kindergarten in the early 60’s.

With a flair for writing and photography, an exciting time in June’s work career was her assignment as the Portage township reporter for the Valparaiso Vidette-Messenger newspaper during the incorporation of Portage in 1959. Her carefully detailed articles and many photographs serve as historical artifacts of the development of the area when Portage was Indiana’s fastest growing town.

June loved volunteering, and her contributions were many. She was a member of the Porter County Mental Health Board, board member of the Portage Township Emergency Food Pantry, Lafayette Home Hospital volunteer, and a volunteer at Indiana Legal Services. Some of her organizational memberships included United Methodist Church, Music Teachers National Association, American College of Musicians, West Lafayette Musicale, Tippecanoe Music Teachers Association, National Education Association, and the Retired Teachers Organization of Tippecanoe/Benton/Carrol counties.

June’s Christian faith was paramount in her life, and her commitment to the United Methodist Church was steadfast. In recent years, her participation in an Otterbein UMC Sunday School class led by Jan Conner was a source of joy and inspiration.

With a bug for travel, June visited all 50 states, Canada, Mexico, and Europe. A highlight of her travels was the year that June and Bob bought open-ended plane tickets and toured many cities in the U.S.

In addition to Bob and George, June was preceded in death by her daughter Anita Schumpp in 2003 and her brother Paul Branham in 1996.