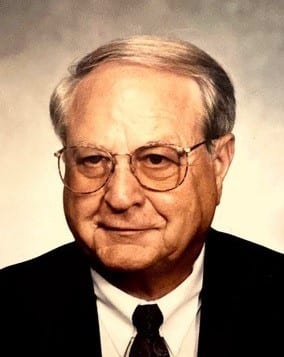 With the current state of the pandemic, the family is holding a private service.

Thomas “Tom” Redmon, of Lafayette, Indiana and Ellenton, Florida, passed away on December 6, 2020. Tom was born in Radnor, Indiana, to Eugene and Mildred Redmon who predeceased him. Tom graduated from Delphi High School and later served in the United States Army. After completing his military service, Tom started his professional career at Alcoa and then moved to TRW Ross Gear where he later retired as Plant Engineer. Tom was active in the community and over the years served as a Boy Scout troop leader, a church Elder at Brown Street United Methodist Church, a Red Coat at Home Hospital, and the Exalted Ruler of the Lafayette Elks Lodge #143.

Tom married the love of his life Marilyn “Lynn” Redmon on June 11, 1959.  Together they created a life focused on their family of two daughters and a large group of friends from Delphi, their work, the Brown Street United Methodist Church congregation, and their neighborhoods. Tom never knew a stranger and we would often comment that wherever we went, he always saw someone he knew. Tom and Lynn loved to travel and visited all 50 states in their sixty-one years of marriage. Together, they especially enjoyed trips to Alaska and Hawaii. They also caught the cruise bug and took many trips to the Caribbean. Tom loved Lake Michigan perch, driving his golf cart in Florida with his Schnauzer, Disney’s Country Bear Jamboree, and gardening. Just this spring, he built raised vegetable beds, complete with an irrigation system he engineered himself. Tom also loved a good day at the beach and some of our fondest memories were made on the sandy shores of Holland, Michigan and Treasure Island, Florida. He enjoyed fishing, auto racing, and a cold Coors Light, especially with his bowling team. But more than anything, Tom lived to make people laugh. He was always the life of the party and had an endless supply of jokes, which would usually end with him laughing so hard he cried.  We know Tom would not have wanted us to be sad about his passing and would rather us celebrate the wonderful life he lived.

In addition to his parents, Tom was predeceased by his siblings Lois Redmon, Joy Redmon, William “Bill” Redmon, his brother-in-law Jim Flora, and his beloved daughter, Kristi Redmon.  He is survived by his wife, Lynn; his sister, Frances Flora Burton (Dean); his daughter Kelly Wendt; his son-in-law Jim Wendt, and his sister-in-law, Linda Redmon.  Words cannot describe his pride in his grandchildren:  Skylar Redmon, Arielle Redmon, Claire Wendt, Kiley Wendt, and Blake Wendt.  Lastly, he leaves his constant companion, Sadie the Schnauzer.

With the current state of the pandemic, the family is holding a private service.  In lieu of flowers, donations can be made to Brown Street United Methodist Church: 905 Brown Street, Lafayette, IN 47904, or the Kristi Redmon Memorial Art Scholarship, care of:  Kelly Wendt, 10368 Hickory Ridge Drive, Zionsville, IN 46077.

Lastly, the family wishes to thank Elara Hospice and Comfort Keepers who did their best to provide comfort, care, and dignity in these challenging times.

With the current state of the pandemic, the family is holding a private service.