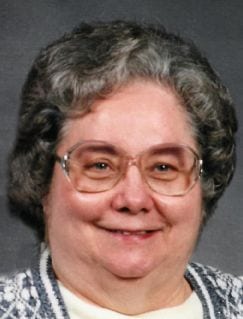 Patricia was born June 19, 1935 in Indianapolis to the late Delbert A. and Imogene (Bonham) Edmondson. She was a 1953 graduate of Lafayette Jefferson High School.  On December 31, 1955, she married Kenneth Lloyd Williams in Lafayette. He preceded her in death on March 30, 2010. Patricia wanted to further her education and graduated from Delaware State College with her Teaching Degree in 1969. Upon graduation, Patricia taught First Grade at a school in Delaware for 6 years prior to returning home to Lafayette.  Upon her arrival in Lafayette, she was hired by Purdue University’s Bursars Office where she remained until her retirement in 2000.  Patricia was a member of the First Baptist Church in Lafayette where she was a Deacon, served on the Missions Board, and taught Sunday School. Patricia enjoyed genealogy, reading, knitting and music.  She also enjoyed camping and home-made ice cream, but would never turn down Frozen Custard as long as it was vanilla.  Surviving are daughter, Brenda Sue (husband Larry) Malher of Lafayette; granddaughter, Cynthia (husband Raymond) Armstrong, and great-grandson, Griffon Armstrong.

Along with her husband, Kenneth L. Williams; her parents, Delbert and Imogene Edmondson, she was preceded in death by her 2 sons, Richard E. Williams and Kenneth LeRoy Williams.