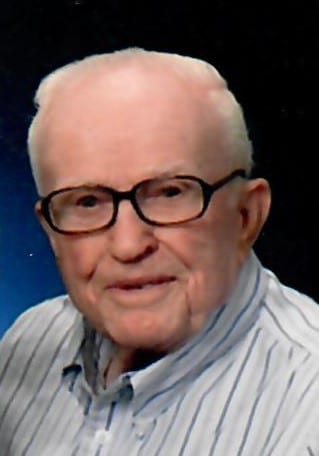 Chester “Chet” Earl Davis, 99, of Lafayette died Wednesday, September 18, 2019 at IU Health Arnett Hospital.
He was born December 7, 1919 on the family farm in Shelby Township, Tippecanoe County to the late Hobart Abram and Daisy Marie (Eberle) Davis. He was a 1938 graduate of Pine Village High School. He was drafted into the United States Army in May 1942 and served in the Battle of Normandy and the Rhineland Invasion, as well as in Northern France, Germany, and Central Europe. He was awarded the Bronze Star and the Purple Heart for his service. He was honorably discharged in September 1945. Chet was a grain farmer but also had some livestock at one point. On February 14, 1948, Chet married the love of his life, Virginia A. Schwamberger at the United Methodist Church in Otterbein. Virginia preceded him in death on November 27, 2017.
He was a member of the Otterbein United Methodist Church and a life member of the Veterans of Foreign Wars (VFW). He was Past Director of the Jasper County Co-op. Chet enjoyed fishing, Cubs baseball, Purdue sports, gardening, and playing Euchre. He loved watching his grandchildren play sports.
He is survived by his 3 daughters, Linda (David) Swank of Lafayette, Carol (John) Bisher of Romney, and Sharon Davis of Lafayette; 4 grandchildren, Gregory (Rachel) Swank of Lafayette, Megan (Randy) Martin of Lafayette, Lindsay (Brian) Foster of Brownsburg, Brett (Kelsey) Bisher of Darlington; and 5 great- grandchildren, Kailyn and Brody Martin, Arabella and Evelyn Swank, and Cannon Bisher.
Along with his wife and parents, he was preceded in death by a brother, Robert Davis.
In lieu of flowers, memorial contributions in Chet’s name may be given to the Otterbein United Methodist Church, 405 E. Oxford St., Otterbein, IN 47970. Envelopes will be available at the funeral home.
Visitation will be from 11:00 am until time of service at 2:00 pm, Saturday, September 21, 2019 at Soller-Baker Funeral Home, West Lafayette Chapel, 1184 Sagamore Parkway West, West Lafayette with Pastor Ben Cassiday officiating.
Interment will follow at Pond Grove Cemetery in Otterbein.