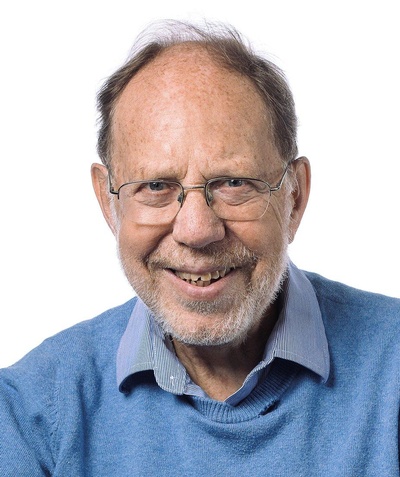 Michael G. Rossmann died peacefully in his sleep on May 14th at University Place in West Lafayette, Indiana. Michael was born on July 30th, 1930 in Frankfurt, Germany. He immigrated with his mother to London, England in 1939 as World War II ignited. He attended Saffron Walden Friends (Quaker) Boarding School, went on to The University of London receiving a Bachelor’s of Science in Mathematics and Physics and then a Master’s of Science in Physics in 1953.

He then moved to Glasgow, Scotland to complete a PhD at the University of Glasgow in Chemistry Crystallography. Michael met his future wife and mother of his children, Audrey Pearson, on a vacation in Spain. They were married a year later at the Adel Friends (Quaker) Meeting House in Leeds on July 24th, 1954.

By the time he had completed his studies, their first two children, Martin and Alice were born. The family moved to Minneapolis, Minnesota where Michael was a post-doctoral scientist. In 1958 they moved to Cambridge, England where Michael was a Research Associate at the MRC Laboratory of Molecular Biology under Max Perutz. In 1959 they had their third child, Heather.

In 1964 the family moved to West Lafayette where Michael joined the Purdue University Faculty. He stayed more than 50 years, becoming the Hanley Distinguished Professor of Biological Sciences. He was a member of the National Academy of Sciences and the Royal Society of London. Michael had a passion for his work. The best way to learn and discover was to discuss and share. He wanted everyone to share his passion and he shared the passion that others had.

Michael created a dynamic group at Purdue with an overwhelming number of publications and discoveries from early in his career to the very end. To quote Richard Kuhn, one of Michael’s close collaborators, “His work has made a real impact across the globe; the world is safer from infectious viruses because of his dedicated work.” A few of these viruses are the common cold, dengue and very recently (2016) Michael and colleagues made headlines when they found the structure of the Zika virus. With the structures known, it becomes a much easier job to find vaccines.

Michael was not just about science, he was a true renaissance man. He loved hiking and camping, sailing, skiing, history and being a part of the art world with Audrey. He loved going to the theater and the best evenings for him were dinner with family and ­friends discussing everything from politics, science, and where to travel on the next family holiday.

Michael lost his soulmate and wife of 55 years in 2009. He was very fortunate to meet Karen Bogan in 2015. They were married May 1st, 2018, and had a very happy loving relationship. They adored each other.

A meeting in his memory will be held at 10am on Friday May 24th at University Place, 1700 Lindberg Rd., West Lafayette in accordance with the Quaker tradition. Doors will open at 9am for people that would like to mingle and visit with the family, but do not have time to stay for the memorial meeting. Immediately following the service there will be a reception with light refreshments again where friends and family can reminisce. Please feel free to come and stay or simply give your quick condolences.

Instead of flowers it is suggested that donations be made to Doctors Without Borders. (https://donate.doctorswithoutborders.org/)