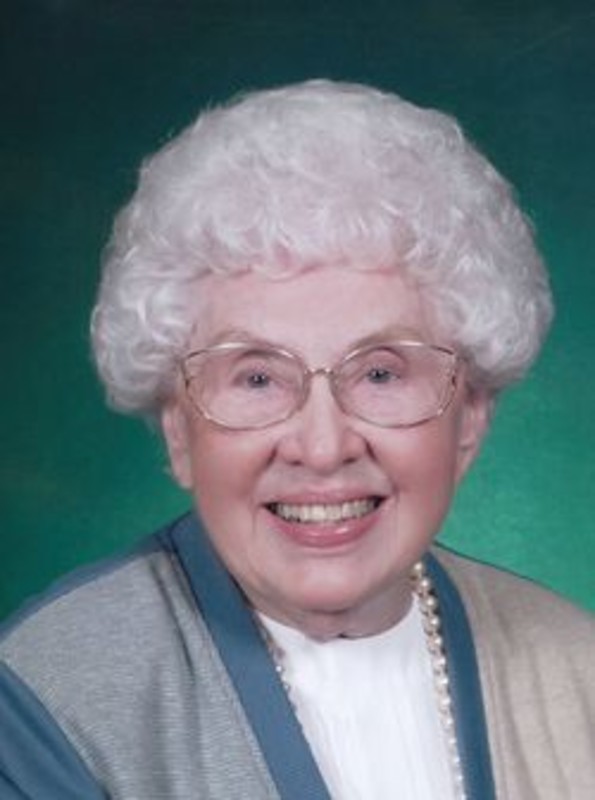 Mary S. Lottes died on Saturday, July 16, 2016 at Creasy Springs Health Campus in her hometown of Lafayette, Indiana at the age of 97.   She was born Mary Louise Schnaible to the late Emil and Alma (Schurman) Schnaible of Lafayette on July 26, 1918. Because of potential complications of her premature birth, she was born in Indianapolis and baptized in the hospital two days later by the Rev. Paul G. Schmidt of St. James Lutheran Church of Lafayette.  She graduated from Jefferson High School in 1936 and from Purdue University in 1940, where she was a member of Phi Mu sorority.
On October 2, 1942, she married John Clarence Lottes, with whom she had four children.  In addition to her parents, Emil and Alma Schnaible, Mary was preceded in death by her beloved husband, John Clarence, on November 10, 1951; her youngest daughter, Jeanne Anderson, on January 16, 2000; her son-in-law, Louis Anderson, on December 6, 2000; her son-in-law, William Robert Young, on November 23, 2015; as well as her sister, Alma Hopwood, and her brother, Frederick Schnaible.  Surviving are two sons, James Lottes (Giovanna) of Radnor, PA and John Lottes (Vicki) of Glen Carbon, IL; one daughter, Janet Young of Livonia, MI; seven grandchildren: John Young (Raquel) of Fishkill, NY. Dan Young (Carrie) of Livonia, MI, David Lottes of Redding, CA, Lillian Lottes of Owings Mills, MD, Eric Lottes of Sewell, NJ, Matt Anderson (Alyssa) of Fishers, IN, and Joel Lottes (Nancy) of St. Louis, MO; ten great-grandchildren: Abigail, Sarah, Emma, Joseph, Mark, Ethan, Cora, Jacob, Daphne, and Della; two sisters, Miriam Schreck of Traverse City, MI and Eleanor Hooker of Lafayette; and numerous nieces and nephews.   Widowed at age 33 with four children (ages 7, 5, 4, and 2), Mary successfully raised them all to adulthood. She worked for many years at the Schnaible Drugstore on the Courthouse Square, which was owned first by her father and then by her brother. She was a lifelong member of St. James Lutheran Church, and there in the early 1950s she started the Book Counter, which continues to this day as a congregational and community resource for Bibles, books, gifts, and cards.   Mary’s deep Christian faith was the foundation for the way she lived each day. Mary’s family was also the delight of her life, and she enjoyed many opportunities over the decades to host holiday gatherings and special events that celebrated the cherished company of loved ones.   Visitation will be at St. James Lutheran Church on Thursday, July 21, 2016 from 9:30 AM to 11:00 AM. Funeral service will take place at St. James Lutheran Church, 800 Cincinnati Street, Lafayette on Thursday, July 21, 2016 at 11:00 AM with the Rev. David French officiating. Burial will be at Spring Vale Cemetery in Lafayette beside her husband.   Memorial donations may be given to the “Tuition Assistance Fund” at St. James Lutheran School, 615 N. 8th St., Lafayette, IN 47901.