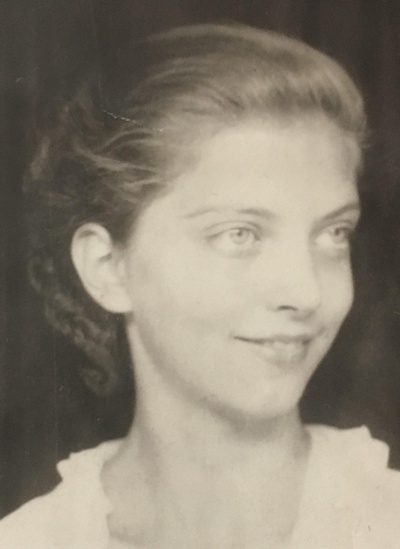 Lucy was born in Lafayette on November 8, 1918 to Roy and Edith Demoret.

She was graduated from Highland Elementary and Jefferson High School (1936) in Lafayette and Purdue University (1940).

While at Purdue, she was a member of the Kappa Alpha Theta Sorority and worked as the assistant to Dorothy Stratton, Dean of Women. In her freshman year at Purdue, Lucy met Ralston Raymond (R²) Hannas, Jr. They married in June 1941 while R² was in the Marine Corps– a few months before Pearl Harbor.

In 1964, they moved to Kansas City, MO. Lucy, in addition to raising her children, was always interested in tennis– where all the children excelled. She took them to lessons and to tournaments for years.

Lucy continued to be very active raising the family and worked as a substitute school teacher in the Kansas City, MO School District and for years in the Kansas City Public Library at the Plaza. She also served as an officer (Treasurer) for the Heart of America District Tennis Association.

Lucy always had an interest in reading, usually books relating to history. In her later years, she enjoyed helping at the Willis/Elliott Orchard, Spickard, MO. Her main interest and love was her family, of which she was the heart and soul.

Lucy was preceded in death by her parents, Roy and Edith Demoret, her sons, Mike and Andrew Hannas and her daughter, Margaret Hannas.

The family would like to extend special thanks to the wonderful staff at Silvercrest as well as Crossroads Hospice for their excellent care.

A graveside service will be held at 2:00 pm on Saturday, February 9, 2019 at Grandview Cemetery in West Lafayette, IN.