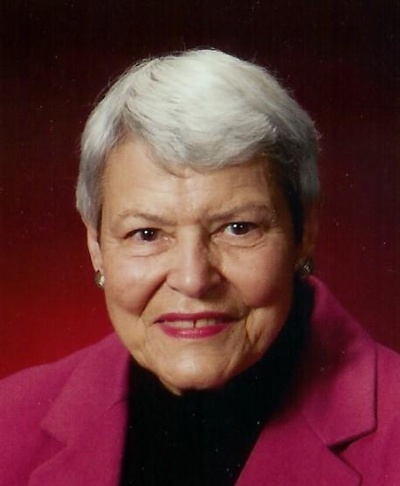 Jo Ann Bloodgood died on April 11, 2019, having lived a long and contented life. She was a lifetime Indiana resident, born in Frankfort Hospital in Clinton County on June 7, 1929, to Fredrick William and Mary Otten Rose. She graduated from Lafayette Jefferson High School in 1947 and Purdue University in 1951 with a Bachelor’s Degree in Home Economics. She taught Home Economics in Crown Point, Indiana from 1951-53, then returned to Purdue to earn a Master’s Degree in Food and Nutrition and Home Management in 1954.

On August 7, 1954, she married Donald Austin Bloodgood. They were married nearly 60 years prior to Don’s passing in 2014. After their wedding, she taught at Purdue until the first of three children was born in 1955. Though she did not work formally after the kids arrived, she lived her degree by cooking wonderful meals, sewing and knitting clothes and household items, refinished furniture, and was always home when the family returned from school or work.

She had a lifetime of active memberships – she was a Charter Member of Covenant Presbyterian Church where she was active in the youth and bible study classes. She was also in the Pi Beta Phi sorority, Tri Kappa Epsilon Beta of Kappa Kappa Kappa, and Chapter D of the PEO Sisterhood; she held many offices in these groups. Later in life, she became involved in genealogy and a member of DAR, which culminated in her authoring a book about her Chittick heritage.

She was very involved in her children’s activities of scouting, sports and band outings while they were in school. Later in life she enjoyed playing bridge, gardening, and reading and studying the bible. She and Don traveled to 33 different countries and all 50 states, and enjoyed all things Purdue!

A private burial will be held at the Rossville Cemetery, where JoAnn will be laid to rest with 5 generations of both her mother and father’s families.