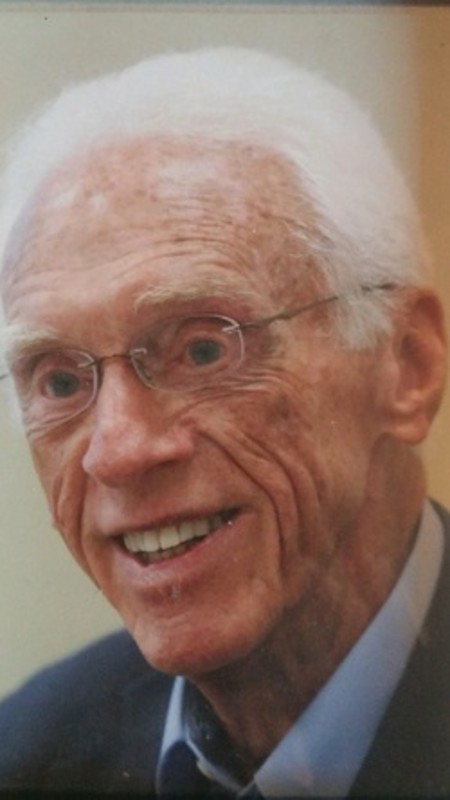 Jerry was born October 16, 1924, his mother Jessie Barrett Cole giving birth upstairs in the Church of God of Norfolk during a prayer meeting conducted by his Grandfather.  Jerry's father, Jerry Vance Cole, passed away in 1926, and Jerry was reared by his loving mother along with devoted aunts, uncles and cousins, and later, a wonderful stepfather Richard Commander.

He attended Maury High School, but quit at age 17 to join the Navy (1943-1946) and later enlisted in the Marine Corps (1948-1951) during the Korean conflict. Thanks to his service, Jerry was able to participate in the Honor Flight in 2012, and be recognized for his contributions to our country.

Jerry began his long and successful career working in the insurance industry in 1956, when he joined Prudential.   He joined Lafayette Life Insurance in 1959, and moved to Lafayette Indiana in 1962.

Jerry's duties with Lafayette Life carried him all over the US and Europe.  He was a 20-year member of MDRT, and his illustrious career spanned more than 52 years.  For 33 years, he was a Regional Director and traveled the world recruiting for Lafayette Life.  He retired in 1987 for ONE day.  He took out a general agent's license and led the company in sales.

He grew to love his new home in Lafayette and the people he met along the way, and became very active in many civic areas, including the Lafayette Symphony Foundation and Bach Chorale. He and wife Faye chaired the first two Hero campaigns for the Red Cross, and were very active in the Community Cancer Network.

He was a long-time member of the Rotary Club.  He and Faye loved ringing bells for the Salvation Army at Christmas.  He was remembered for the Santa hat he wore that had giant moose antlers attached!

Jerry was a Mason and a Shriner. He was a member of Owens Lodge #164 in Norfolk, Norfolk Chapter #1 and Grice Commandry. For many years, Jerry was a Shrine clown and dressed as 'I Don't Know”, would visit ill children in hospitals and burn centers.  He was always happiest when he could put a smile on a child's face.

Jerry married Faye E. Klein Slayton on November 5, 1983. They traveled extensively all over the world, and were blessed to have so many amazing years together. They did mission trips to Slovakia and Peru, and always wanted to help others. But when in Lafayette, they could always be found at McDonalds every morning, eating the same thing and socializing with their special McDonalds friends. That went on for 35 years!

For many years, Jerry and Faye could be seen at Dickens in downtown Lafayette, serving hot Marley Barley soup to those who strolled down Main street.

In 1997 they were Grand Marshalls of the annual Christmas parade, and their beloved dog Kelsey rode in the parade with them.

Always a good sport, Jerry was willing to dress up and take part in practical jokes on a regular basis.  Most recently he dressed as Ginger from Gilligan's island for a theme wedding.  He was as comfortable in his monogrammed shirts as he was in sequins, if it was for a good cause and could bring laughter to someone in need.

With all that Jerry had accomplished in his amazing life, his one regret was that he never went to college.  So, at age 83, he enrolled at Purdue.  At 86 he received his Associates degree and, on May 9, 2015, at age 90, he walked across the stage to thunderous applause as he accepted his Bachelor’s degree in Organizational Leadership.

Jerry never met a stranger, and was loved by everyone he met and befriended.  Quick with a joke and a smile, Jerry had a huge and kind heart, and will be greatly missed by all those who were fortunate enough to meet and know him.

Above all else, from the moment of his birth above the prayer meeting, until the moment he left this world to join His Savior, Jerry was a good and faithful servant, and was blessed to have found a church home at Heartland Community Church.

“I have fought the good fight, I have finished the race, I have kept the faith.” 2 Timothy 4:7