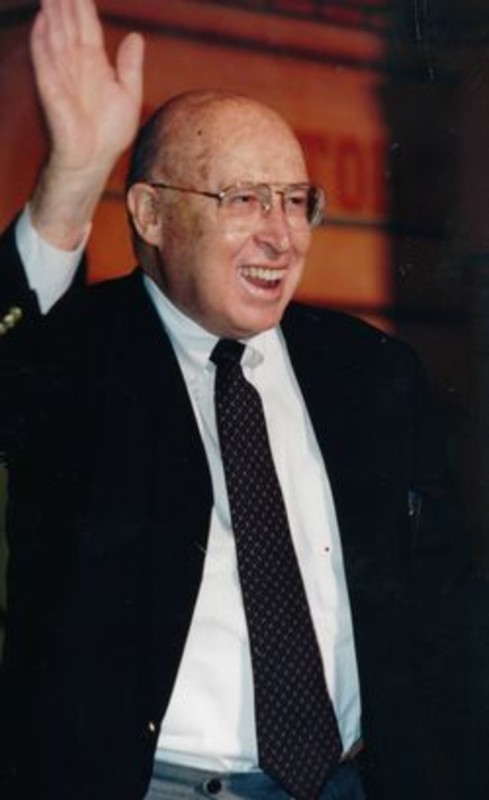 James L. Hanks, of West Lafayette, was born July 1, 1923 in Crossville, Illinois, the eldest of three children of Roy and Gladys Hanks. He died October 26, 2015 at Westminster Village in West Lafayette, Indiana. Jim married Bessie M. Townsend on January 22, 1947 in Charleston, Illinois. The marriage produced three children, all of whom survive: Marsha (T. B. Patterson, Jr.) of Lancaster, South Carolina; Marlene (Clark Carpenter) of Talladega, Alabama; Bruce (Carol) of Monroe, Louisiana. There are eight grandchildren: Lindsay (Chris McFadden) of Kirtland, Ohio; Carrie (Jon Besler) of Princeton, New Jersey; Kelli (Bains Fleming) of Birmingham, Alabama; T. B. Patterson III (Lindsey) of Stilwell, Kansas; Jamie Hanks of Baton Rouge, Louisiana; Adam Hanks (Kaki) of Monroe, Louisiana; Reid Carpenter, of Birmingham, Alabama; David Hanks, of Baton Rouge, Louisiana. Jim is also survived by ten great grandchildren: Cassie McFadden, Penny McFadden, Molly Besler, Shail Besler, Nathan Besler, Bo Patterson, Jacob Patterson, Faith Patterson, Ann Clark Fleming and Walton Fleming. A younger brother, Ron Hanks, of Indianapolis, survives. He is preceded in death by one great grandchild, William Fleming and a sister, Alice Hanks Stabler. Jim Hanks was a Southern Illinois farm boy who went to a one-room rural school, rode a horse four miles to high school in Crossville, and was salutatorian of his 1940 senior class. His pre-degree schooling at Eastern Illinois University, which began in 1940, was interrupted by more than three years service in the U. S. Army during World War II. He served with the Third Army in Europe and then returned to Eastern to complete work on a bachelor's degree with a major in social science and minors in business and English. He edited the college newspaper, was senior class president, graduated cum laude, and was president of Phi Sigma Epsilon fraternity. After obtaining a master's degree from the University of Illinois, he served in high school administration as assistant principal and principal at Illinois high schools before beginning a 35-year career in 1952 with State Farm Insurance in Mississippi. His career took him to Birmingham, Alabama and Monroe, Louisiana before he came to Indiana as the Regional Vice President and was a Hoosier ever since. During almost four decades as a resident of West Lafayette, he was involved in numerous community organizations including First United Methodist Church, Rotary, Leadership Lafayette, Junior Achievement, United Way, and Civic Theatre. Leadership Lafayette and Civic Theatre presented him lifetime achievement awards. He has been a member of Rotary since 1976. He served his alma mater as president of the Eastern Illinois University Foundation and was signally honored in 1995 on the 100th anniversary of the school's founding by being cited one of the 100 alumni acclaimed “for most exemplary service” during the first century of the University's history. In 1994, the University named him a Distinguished Alumnus. He was also active many years in the Purdue President Council and Convocations advisory council. Early in his insurance career, he became a Chartered Life Underwriter. Editor of his alma mater newspaper as a student, he continued to write rather extensively in retirement and authored histories of Civic Theatre, Leadership Lafayette and Westminster Village where the Hanks have lived for 16 years. As a resident of Westminster, he has headed the Resident Council and the Westminster Foundation and has received recognition on several occasions for his volunteer work. The family would like to thank all of the wonderful people at Westminster for their kindness and care during the last few years of his life. In lieu of flowers, memorials can be given to the Westminster Foundation or First United Methodist Church of West Lafayette. Visitation will be Friday from 1:00 PM until the time of the service at 3:00 PM at First United Methodist Church in West Lafayette.