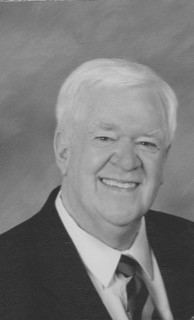 James Joseph O’Brien was born July 9, 1933 in Chicago Illinois to Rose and  John O’Brien.  He graduated from DePauw University in Green Castle, Indiana, with a Master of Education in 1967.  He continued his education at Northwestern University in Evanston, Illinois, receiving a degree of Doctor of Philosophy in 1976.  He became the first lay principle of the Archdiocese in Illinois in 1968 at St. Phillip’s High School.

During his time at St. Phillip’s he met and married Eileen Theresa Jaeger in 1976.  In 1983, the couple moved to Ft. Worth, Texas, where James accepted a job with the US Labor Department as head of Job Corp for the purpose of hiring labor counselors in Texas, Oklahoma, Arkansas, Louisiana, and New Mexico.  James retired in 2004, he and Eileen remained in Texas until 2014, when the moved to Lafayette, Indiana to be closer to family.

James was a devoted follower of Jesus Christ. As a devout Catholic, he cherished the gifts given to him by the Holy Spirit at Baptism and Confirmation. The gifts he cherished were Wisdom, Understanding, Knowledge, Piety, Counsel, Fortitude, and Fear of the Lord.  A private Mass of Christian Burial will be held on Thursday at the Indiana Veterans Home Chapel.  Inurnment will be at the Indiana Veterans Home Cemetery.