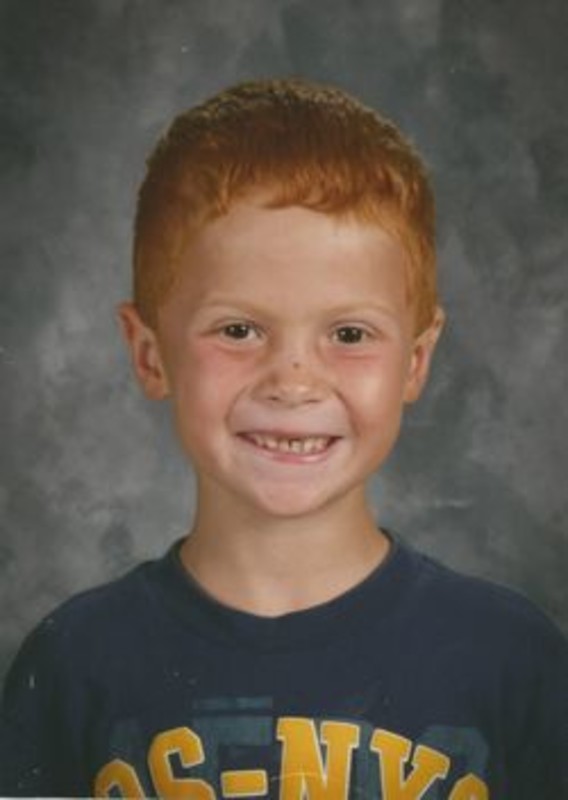 James Allen Stewart, age 9, died on Sunday, December 6, 2015, at Riley Children’s Hospital in Indianapolis, IN. James sustained a traumatic head injury when he fell while cutting wood with his father. James was born on June 16, 2006 in Lafayette, IN, to parents Tracy Stewart and Karen Short Stewart. James was an active, athletic, adventurous child who loved to be outside always on the go. He was known by his family and friends as being loving, funny, smart, and always having a smile on his face. He was a sweet boy who didn’t know a stranger and was loved by anyone whom he encountered. He played baseball for MYBL and soccer for GLRSA. He was a 4th grade student at Mayflower Mill Elementary School. He liked to ride on his family’s David Brown tractor as well as play with his toy semi- trucks and tractors. His imagination was endless. James is survived by his parents, Tracy and Karen; his brothers, Joshua and Jared; his sister, Rachel; his paternal grandparents, Henry and Dottie (Brown) Stewart of Burlington, KY; his maternal grandparents, Elmer and Joan (Thomason) Short of Crawfordsville, IN; his uncles and aunts, Theresa (Stewart) Gentry of Cheyenne, WY, Ron and Rinda (Short) Hahn of Carmel, IN, Denise (Short) Garrett of Crawfordsville, IN, Nick and Sharon (Short) Kashon of Apollo Beach, FL, Travis and Roxann (Short) Cedars of Lafayette, IN; 13 cousins; his best friend, Owen Souligne, and his beloved puppy, Bailee Mack. Visitation will be from 2:00-6:00pm on Saturday, December 12, 2015 at Soller-Baker Funeral Home 400 Twyckenham Boulevard Lafayette, IN 47909 Funeral Services will be at 1:30pm on Sunday, December 13, 2015 at Kossuth Street Baptist Church 2901 Kossuth St Lafayette, IN with Pastor Don Whipple and Pastor Drew Humphrey officiating. The burial will be at Meadow View Cemetery 3733 Poland Hill Rd Lafayette, IN