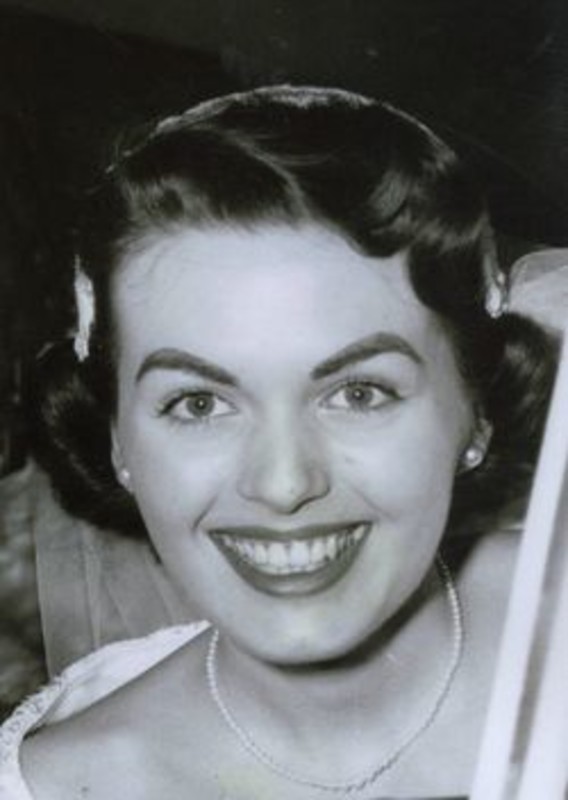 Helen LaVerne (Tudy) Golden Vaughan, 82, passed away May 13, 2013 surrounded by her loving family. Tudy was the oldest child of Helen Marietta Pettett and Vernon Cecil Golden who preceded her in death. Tudy was born in Chillicothe, Illinois on July 12, 1930 and moved to Chicago when she was six. In 1947, she moved to Lafayette, Indiana and met her future husband, Charles Reifers Vaughan. Charley played basketball and Tudy was a cheerleader for the Jefferson High School 1948 Indiana State Basketball Championship team. Tudy received a Bachelor of Science Degree from Purdue University in 1952. Tudy married Charley on April 24, 1954 at St. Mary Cathedral. They lived in Chicago until they moved to Lafayette in 1957 to raise their family. In 1951, Tudy was the Purdue Yearbook Debris Queen, Miss Lakes O' Monticello, and Miss Indiana Runner-up. Tudy received a scholarship to the Art Institute of Chicago, but chose to model instead. Tudy was in Life Magazine, Look Magazine, The Saturday Evening Post, and was the top calendar model in Chicago. She was on Bob Hope TV specials, Victor Borge's TV show, and in numerous television commercials. She was named “Miss Chicago” in 1952 and was selected as a Coca-Cola model in 1953. She was a photographer's model for artists Gil Elvgen and Walt Otto. She appeared in ads for Maytag, Reddi-Whip, Hotpoint, Eureka, Greyhound, Shlitz Beer, Miller Beer, Drewrys Beer, Admiral T.V., Carson Pirie Scott, and the Sears Catalog among others. Her images still appear on retro items today including Isabella Fiore Handbags. Tudy retained her love for watercolor and oil painting throughout her life and was an avid reader. She discovered her love for flying and became an instrument rated pilot in her 40's and she liked to fly her Beechcraft Bonanza A-36 everywhere. Tudy was Secretary of the Purdue University Alumni Association, was on the Lafayette Economic Development Commission, Purdue University Art Galleries Board, and the Prophetstown State Park Board. Tudy was President of the Kappa Alpha Theta Alumni Club and was on the House Committee for the major renovation of the sorority in 1991-92. She was also a member of AOPA – Airplane Owners Pilots Association, American Bonanza Society, Lafayette Country Club, John Purdue Club, Purdue President's Council, St. Mary Cathedral, and Tri Kappa Sorority. Tudy is survived by her husband Charles R. Vaughan and four children: Charles V. Vaughan (wife, SaraBeth), Steven J. Vaughan, Kelly V. Busch (husband, Terrance) all of Lafayette and Suzanne V. Bindley (husband, James) of Carmel, Indiana; grandchildren: Charles J. Vaughan, Jack H. Vaughan, Lauren R. Vaughan, Nicholas V. Busch, Scott C. Busch, Sean T. Busch, Holly V. Bindley, Lillian S. Bindley, and Joy G. Bindley. Also her sister Penny G. Miller (husband, Ronald) and their son, Grant Miller (wife Tracie) of Lakeland, Florida and numerous loving nieces and nephews. Friends will be received from 5:00 until 8:00 pm Sunday, May 19 with Rosary Service at 4:45 pm at Soller-Baker Lafayette Chapel 400 Twyckenham Blvd Lafayette, IN 47909. A Mass of Christian Burial will be held at 11:00 am Monday, May 20 at St. Mary Cathedral 1207 Columbia St. Lafayette, IN 47901, with Father Daniel Gartland officiating. Burial will follow at St. Mary Cemetery.