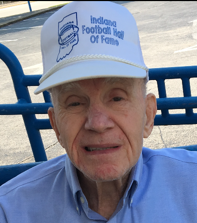 Ernest Vernon Beck, 82, passed away at his home in University Place on January 15th 2020. Ernie was a beloved father, grandfather, brother, teacher, coach, and friend. He was born July 10, 1937 to the late Woodrow and Evelyn Beck at home in Vigo County Indiana. Ernie graduated from West Lafayette High School in 1955, received his BA from Ball State University in 1959, and his Master’s degree in education from Purdue University in 1961. He married Nancy J. Dye on April 19,1962. She preceded him in death. He married Linda Seaton Branigin on June 15th, 1991. She preceded him in death on May 22, 2018. Ernie has an amazing career in the West Lafayette School system for over thirty years. He was a memorable sixth grade teacher at Kingston Elementary, a fixture at 5th grade camp, Jr. High athletic director, and a PE and health instructor at WLHS. He is most remembered for his coaching career. Ernie was the second most winningest football coach in WL history, taking his teams to the state final as runners up in 1984 and state champions in 1993. Ernie retired in 1999 and in 2000 was inducted into the Indiana Football Hall of Fame. In addition to Purdue sports and watching the Colts Ernie enjoyed camping, nature, bird watching, playing cards, golf, fishing, and spending time with his family.
Ernie was preceded in death by his parents and sister Patricia Huffer. He is survived by his daughters Elizabeth (Betsy) Homan and Barbara Beck, as well as sister Becky Daugherty (Chuck). He leaves behind four step children Susan Branigin, Anne Vanderveer (David), Kathleen Linderman (Mike), and Rob Branigin (Maron) and six grandchildren: Nancy Homan, Nate Homan, Will Vanderveer, Caroline Vanderveer, MaryRachel Linderman and Josephine Linderman, as well as several nieces and nephews.
A memorial service will be held at Covenant Church on February 1st 2020 at 11:00 A.M located at 211 Knox Drive, West Lafayette, IN. 47906. A time of visitation and luncheon will follow in the Covenant fellowship hall. Donations to the West Lafayette Education Foundation are greatly appreciated.