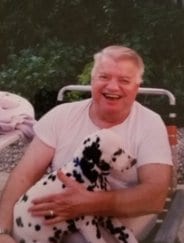 Service at a later date.

Brian Lee Hunt Sr. escaped this mortal realm on March 28, 2020 at the age of 83, to avoid having to make a decision in the pending presidential election. He was a graduate from Jefferson High School and went to Purdue.  Brian spent his life in sales and was a vender at fairs and flea markets and will always be remembered as the “Candy Man”.  His other nick name, known by those closest to him, was “A##@!le”, lovingly given to him by his wife, Alice P. Rainwater Hunt, who proceeded him in death March 31, 2014. He is survived by his children, Brian Lee Hunt and Greg Hunt, both of Lafayette. Penelope Bell Hunt of Virginia, and three stepchildren, James and Paul Schnieder from Lebanon, IN and Deborah Alice Schneider of Fort Wayne, IN.

If you really knew him, you will appreciate this:

If you weren’t such a SOB

You’d still be with us.

A graveside service will take place at a later date.

Service at a later date.