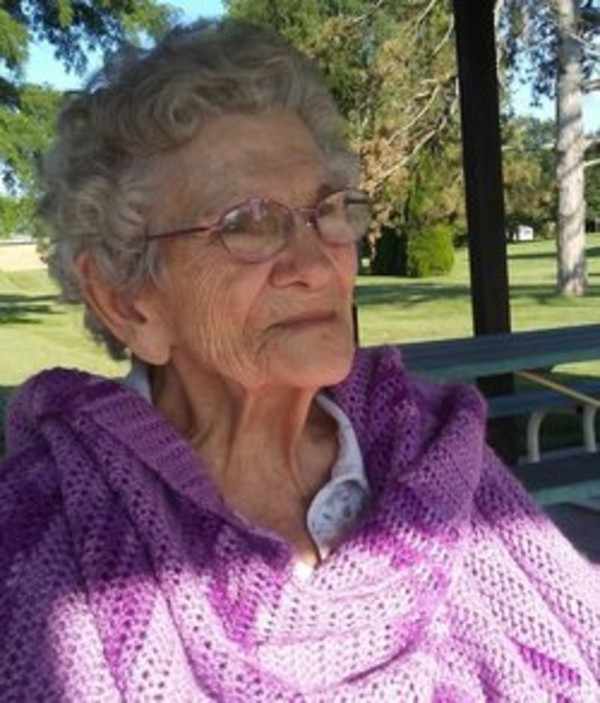 Bettye Nell (Baker) Fouts, 91, of Lafayette, passed into Paradise on October 29, 2017, at the Mulberry Health facility, where she had been a resident for nearly two years.

childhood and her teen years living with her grandparents, Horace Lee and Betty Dotson Baker, and under the influence of her Uncle R.B. and Aunt Margaret Baker.

At the age of twelve she put on Christ in baptism and remained faithful to her Lord throughout her life.

Graduating from Colorado City High School at age 16, she was employed during World War II at the Midland, Texas, Air Field Bombadier School, as a secretary.  During that time, she met test pilot, Don Edwin Fouts, from Indiana, and they were married on March 31, 1945.  He is deceased.

At the end of the war, Don and Bettye returned to his home and family farm in Ladoga, Indiana.  Living in the Ladoga, Linden, New Richmond and Lafayette areas, she was a Texas-born Hoosier all the rest of her life, with the exception of a 15-year period in New Mexico.

During their years in Ladoga, she gave birth to four children: Beverly, Lucia, Lee and Mary.  In 1950, at the age of two and a half years (Bev 4½ , Lee 1-year and Mary 1- month) Lucia contracted polio and was paralyzed from the neck down.  (The vaccine would be discovered 4 years later.)  So, in addition to the hard-working life of a farm wife and being the mother of four very small children, she, with her husband, carried the additional burden of that terrible disease while devoting themselves to making life as “normal” as possible for all their children. And they did it well.

During the months that Lucia was in Riley hospital, Don and and Bettye moved to a farm in the New Richmond area.  In a few years R.B. and Donna were born to the family.

In 1975, the children all raised, Don and Bettye located in High Rolls, New Mexico, where she lived until 1990.  She moved back to Indiana to live with her son-in-law and daughter near Lafayette.  She graced their home for 25 years.  Her warmth and wit and creativity blessed everyone who was privileged to know her.

Bettye was a member of the Lafayette Church of Christ on Creasy Lane, where she was affectionately known as Gramma Bettye to all.

A time of Remembrance will be held for family and friends from 2-4:00 on Sunday, November 19, in the multi-purpose room at Faith Community Center, 5572 Mercy Way, Lafayette, IN.