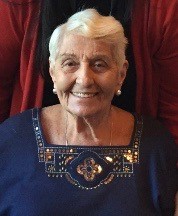 Angeline M. Berberian was born to Levon and Vertime Tirakian on September 19, 1926, in Detroit, Michigan. She passed away peacefully on November 15, 2019.
Angeline is survived by her loving husband of 69 years, William Berberian of West Lafayette, her four daughters, Ann Berberian (Chris Woolley), Mary Isaacs, Nancy Rockstroh (Todd) and Jane Lodde (Brett). She also has six grandchildren, Todd William Rockstroh (Darcie), Angela Holman (Ross), Michael Woolley, Amelia Woolley, Samantha Lodde and Jake Lodde. Angeline had one great-grandchild, Carys Rockstroh.
Angie graduated from Western High School in Detroit, Michigan, and then got her Bachelors Degree in Physical Education from Eastern Michigan University in Ypsilanti, Michigan. Later she took courses at Purdue to update her license while substitute teaching and raising her four daughters. She taught for a year in Detroit, Michigan public schools until she married William Berberian of Harvey, Illinois, on June 17, 1950, in St. John Armenian Church of Detroit, Michigan. After marrying, they settled in Greensburg, Indiana, for two years before moving to Lafayette, then West Lafayette where she raised their four daughters. During that time she taught elementary physical education in the West Lafayette school district where she was recognized by administrators, parents and students as an excellent teacher.
What characterized Angie more than anything else was her positive, gracious nature. She was love incarnated, kind and respectful of everyone. The love of her life was her husband, Bill, “the best husband in the whole wide world”. For them it was love at first sight and that love lasted all 69 years of their marriage. She was a devoted and loving mother, always encouraging her daughters to do and be the best that they could be.
She was very proud of her Amenian heritage. She did a history of her family, from the time they arrived in America after the Armenian genocide to the present, which she shared with her extended family. She did not know how to cook when she got married but she became an excellent cook. She would invite friends for homemade Armenian feasts. Her specialty was paklava which she made from scratch including the phyllo dough. Angie’s other interests included swimming, bridge, reading and traveling.
She valued education and encouraged her daughters as well as her students and friends to pursue the highest level of education they could achieve. She has many friends and loved spending time with them; keeping them for decades. She had a way of making a person feel important and included, removing the feeling of judgement and turning it into a feeling of acceptance and love.
The family will be holding a private ceremony at Soller-Baker West Lafayette Chapel. No flowers, please. Angie requested any donations could be made to West Lafayette Schools Education Foundation, 1130 N. Salisbury, West Lafayette, IN 47906, Saints Joachim and Anne Armenian Church, 12600 S. Ridgeland Ave., Palos Heights, IL 60463, or to the Lafayette Salvation Army, 1110 Union St. Lafayette, IN 47904.