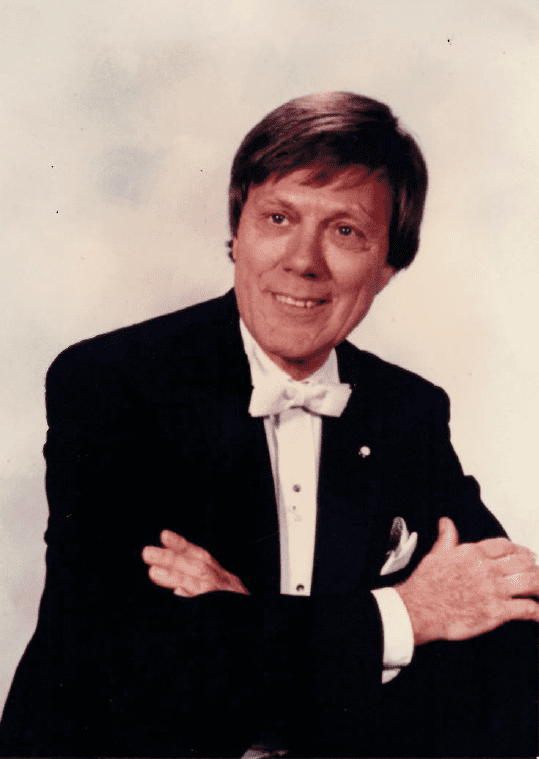 Alfred George James Wright was born in London, England on June 23rd, 1916 to Alfred Francis Wright and Elizabeth Tilley Chapman Wright.  After he finished 1st grade his family migrated to America on the Mauretania and settled in Pontiac, Michigan.  The family stayed with Al’s Uncle George Wright for 6 weeks before buying a small house.  His father started working with the Pontiac Motor Company as a tool and machinist while his mother was a professional seamstress. The local band director, Dale Harris who was also the founder of the American School Band Directors Association (ASBDA),  visited Al’s parents and recruited him to play French Horn in the high school band.  After graduation from Pontiac High School, Wright earned a full music scholarship to the University of Miami in Florida where he earned both a bachelor’s degree (1937) and a master’s degree (1947).  He taught band and orchestra at Miami Senior High School from 1938-1954, where Wright led the program to national prominence.  The Miami Senior High Band performed at the prestigious Midwest Clinic in Chicago in 1951.

In 1954, Al Wright was named Director of Bands at Purdue University, a position he held until his retirement in 1981. Upon retirement, he was named Director of Bands Emeritus.  While at Purdue, Wright was credited for introducing a “show band” style to Purdue University, with intricate drill formations, picture shows and a flashy high step style of marching. During his time at Purdue, Wright added positions to the marching band including the Golden Girl, the Girl in Black, the Silver Twins, the Flag Corps and the Golduster Dance Team.  It was Wright who also started the stirring patriotic tradition of “I Am An American”.  He brought guest conductors to Purdue including Arthur Fiedler from the Boston Pops, Henry Fillmore, Edwin Franko Goldman, Karl King, Ferde Grofe, Sir Vivian Dunn and Paul LaValle.  Wright’s Purdue Bands traveled around the world including performances in Colombia, Venezuela, Japan, Canada, Holland and other destinations in Europe. Under Wright’s leadership, members of Purdue’s marching band also appeared in four separate productions at Radio City Music Hall for a total of 664 performances. In 1971, Wright started the Purdue orchestra program.  He is credited with literally putting the Purdue Band program on the map.

Numerous organizations honored Al Wright with honorary memberships including Kappa Kappa Psi, Phi Beta Mu, and Phi Mu Alpha Sinfonia.  He was elected to the Academy of Winds and Percussive Arts National Hall of Fame of Distinguished Conductors and received the Star of the Order of Merit from the Sousa Foundation.  Kappa Kappa Psi presented him with their Distinguished Service Medal and in 1982, Purdue University awarded him the Distinguished Alumnus Award.  In addition, he was the recipient of an honorary LLD degree from Troy State University.  In 2016, both Al and Gladys Stone Wright were awarded the prestigious Lifetime Achievement Award by the Midwest Clinic.  Both Al and Gladys were also awarded Lifetime Achievement Award by the international band fraternity, Phi Beta Mu and by ASBDA.

Wright served as guest conductor, lecturer and adjudicator in most of the 50 states, in five Canadian provinces, in Japan, Europe and England, He is listed in Marquis’ Who’s Who in America and Who’s Who in the World.  In 2003. Professor Wright was honored by Purdue Band Alumni when a bust of his likeness was placed outside the Purdue Bands entrance at the Elliott Hall of Music.  The Purdue Bands & Orchestras department chair position bears his name. The largest rehearsal hall in the new Purdue Bands & Orchestras facility will be named for Al G. Wright.

Al married Gladys Stone Wright in 1953.  They were married for 67 years.  Al and Gladys traveled the world together and she was the love of his life. She survives. Gladys Wright’s family includes a brother Murvel Stone Jr. and a sister Carole Stone Willavage, 13 nephews and nieces and over 25 great nephews and nieces.

A service will be held at Slayter Center for the Performing Arts on the campus of Purdue University on Friday, September 11 at 2:30pm for family and invited guests. Because of issues related to COVID-19, masks will be required. The service will also be broadcast virtually. Details concerning the virtual service will be available by going to  www.purdue.edu/bands. Burial will follow at the Spring Vale Cemetery in Lafayette. Gladys Wright asks that friends consider donations to Purdue Bands & Orchestras (giving.purdue.edu/bands) in memory of Dr. Wright to support the Hagle Hall building project.  A “Celebration of Life” will be held in the coming months to honor Dr. Wright. You may sign the guest book and leave memories atwww.soller-baker.com